Hey everyone! I hope you enjoyed my May recap entry, now it is time to move on to June and July! Well, to recap June, I didn’t go to any games. In July, I went to 4 A’s games. why so few? I spend a majority of the summer (7 weeks) working at a Boy Scout summer camp, which left little time for games in June and July. However, I still went to a few games, so in this post, I recap the four that I went to. If you want to see my MyGameBalls.com entry from a game, you can just click any of my ball totals that are in parentheses after the game date and location! Hope y’all enjoy this entry!

Like I said, I spent 7 weeks up at Boy Scout Camp. After the end of my 4th week, my dad picked me up and brought me down to Oakland to catch the 1:05 game between the A’s and Mariners on the 4th of July!

We didn’t leave the camp until 11:30, which meant we were late getting to the Coliseum, I slid into my seat around the 3rd inning or so. Will was surprised/excited to see me! 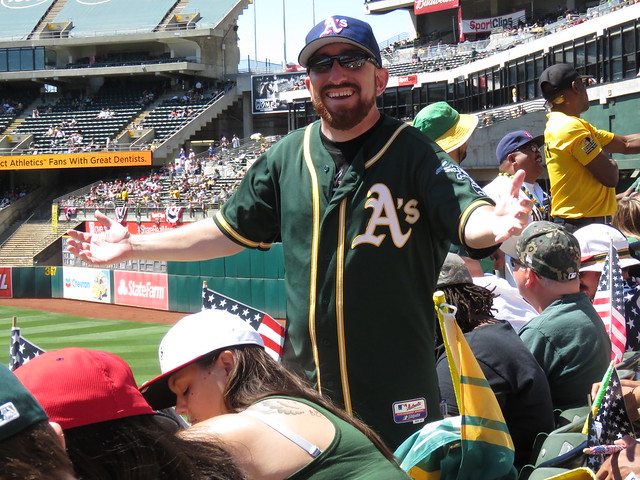 Shortly after my arrival, Kimberlee and I went to the A’s Authentic Memorabilia Stand, where the wives and girlfriends of A’s players were raising money. After making a donation, we stopped and chatted with some of the women, including Eric Sogard’s wonderful wife, Kaycee. 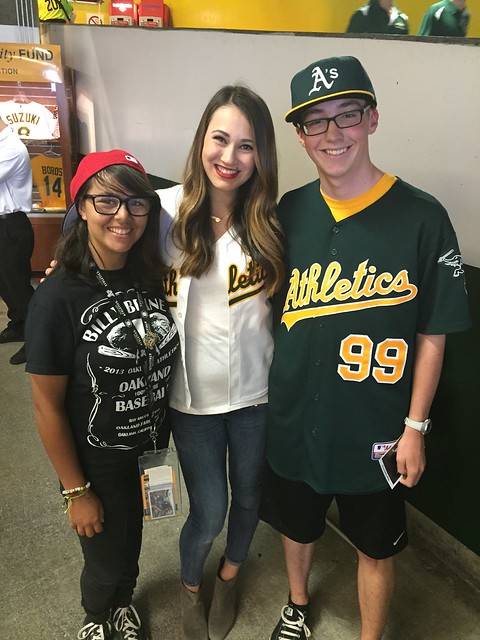 We then went over and had a nice conversation with Eireann Dolan, who is Sean Doolittle’s girlfriend. 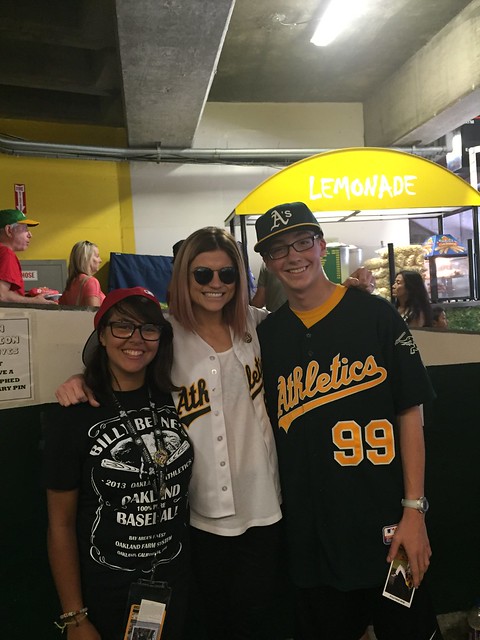 Eireann is a very funny person, so I definitely recommend following her on Twitter. She’s been very nice to me and my family, especially my sister, whose favorite player is Sean Doolittle.

After we ended our conversation with Eireann, we headed back to our seats, where I was finally able to watch A’s baseball in person for the first time in over a month. Since it was the 4th of July, both the A’s and Mariners were wearing special uniforms, as modeled below by Stephen Vogt. 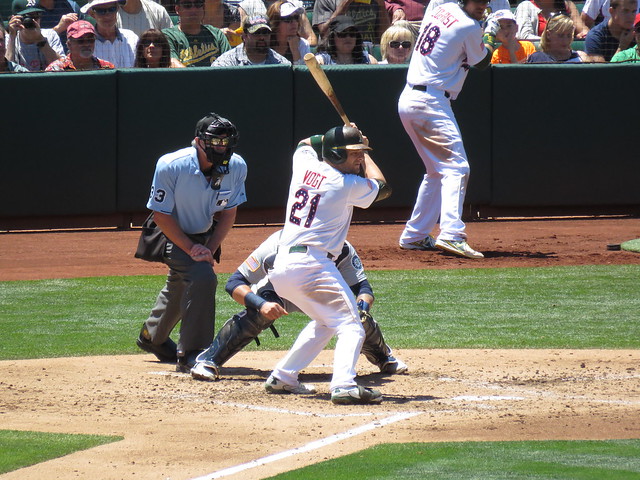 Kendall Graveman was the starting pitcher for the green and gold (or I guess the red, white and blue for this game?) and he pitched a great game. 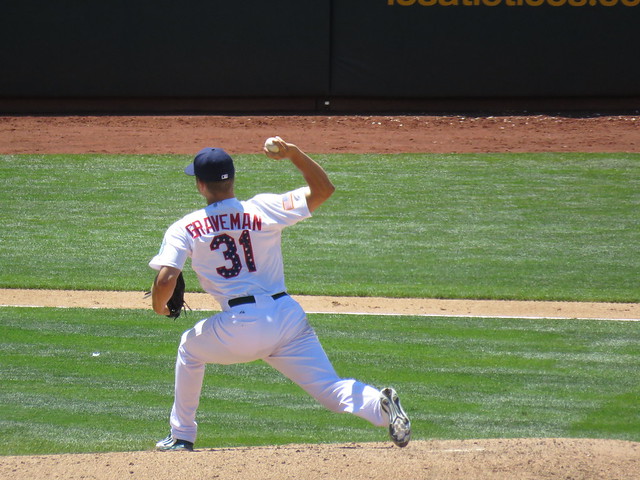 Here’s a random, but cool picture my dad got of Billy Burns sliding into home. 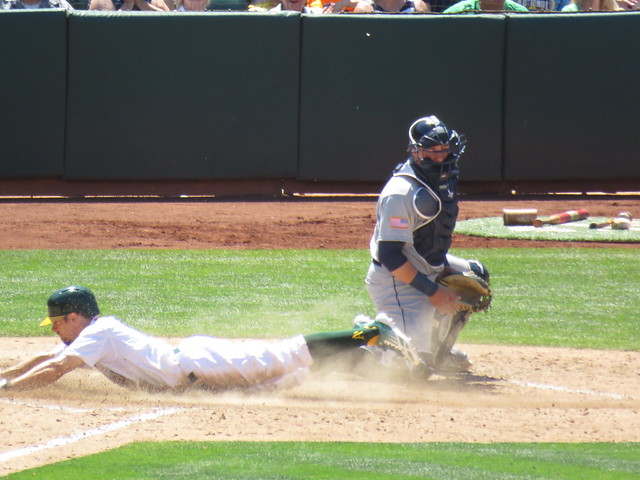 In the middle of the 7th inning, they played “God Bless America.” Someone (I think it was Ross?) brought mini American flags from home. We had them displayed along the first row for the game, but during the 7th inning stretch, we all held them up. 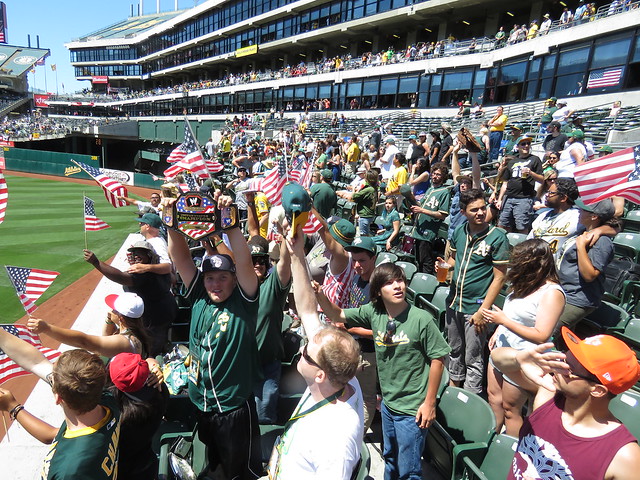 Drew Pomeranz also pitched in this game for Oakland. 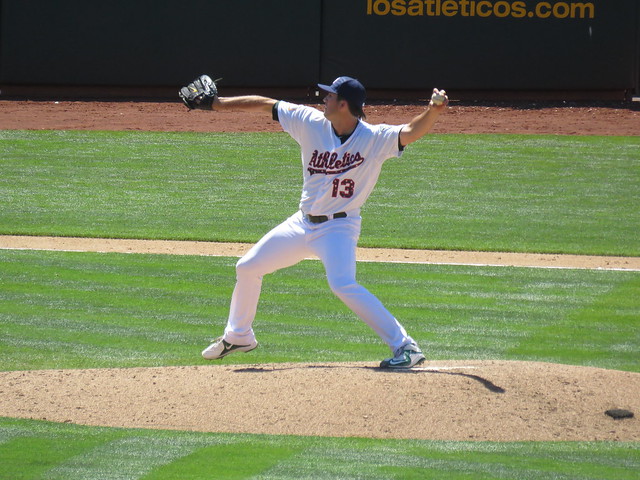 So did Tyler Clippard. 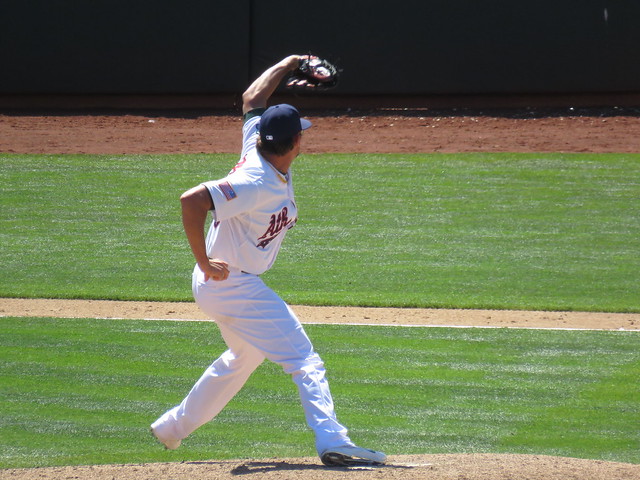 And like usual, Josh Reddick was in right field. 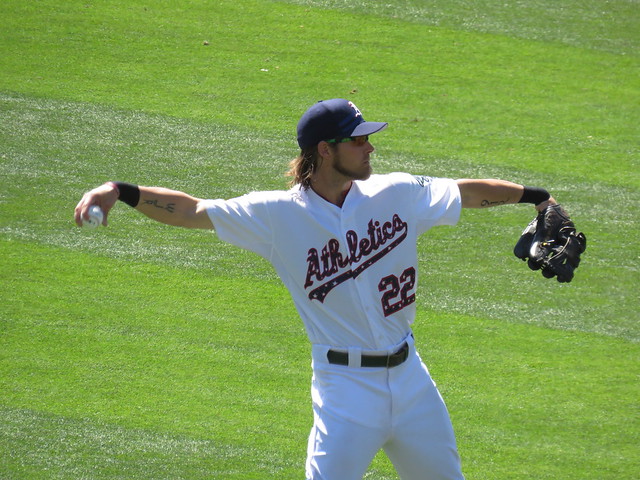 I’ll be honest, when I first heard about these jerseys and hats, I wasn’t excited. Online, I thought they looked ugly and pointless. But after seeing them in person, I absolutely loved the A’s combo!

Before I end this entry, I am going to share this wonderful picture of my good friend Mark. 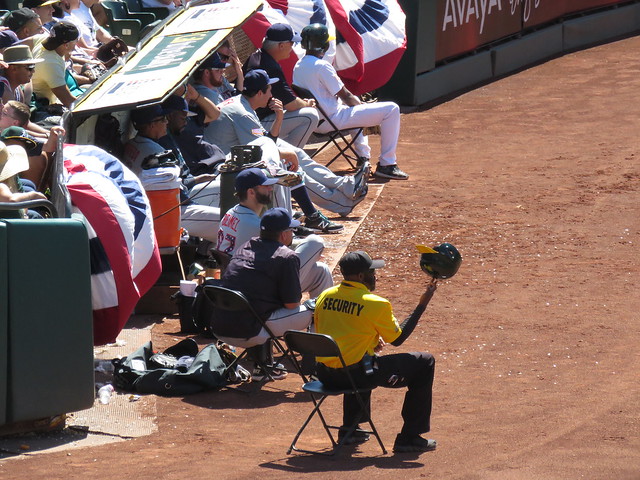 Mark is the security guard stationed at the visitor’s bullpen of the Coliseum and he’s one of the nicest guys you’ll ever meet. In fact, you’ve probably heard of or seen him before. One day, he took a foul ball off of his helmet. Another day, he tore open a beach ball. My favorite moment was from August of 2015 when he retrieved a foul ball. So yeah, he’s kinda famous. If you’re ever at a game in Oakland and see him, don’t forget to ask for his autograph!

I was excited about this game for multiple reasons. First, it was a 6:05 game, which meant I could leave camp without feeling rushed and still get to Oakland before gates open. Also, I was coming to the game with two of my camp friends, Bee and Veronica! Veronica is Kimberlee’s sister and she was my boss in 2014 and 2015 when I worked at camp. So yeah, it’s a small world. I know Veronica from camp and Amanda and Kimberlee from A’s games. And they’re all sisters. And Bee is one of Veronica’s really good friends up at camp, so the three of us went to the game together!

The three of us got to the Coliseum at 3:45, 15 minutes before gates were scheduled to open. Once we got in, the A’s were wrapping up BP 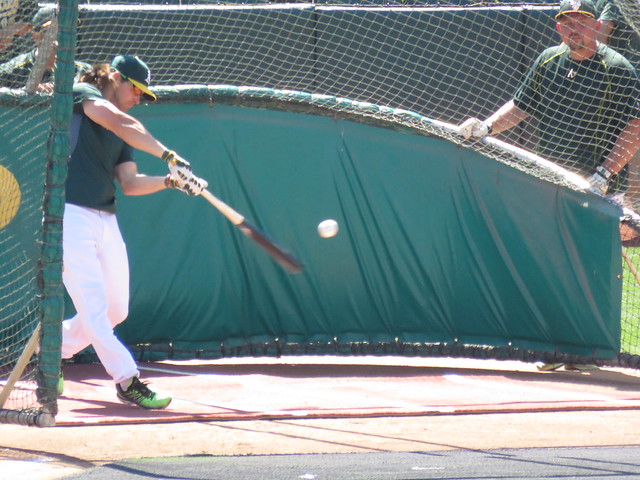 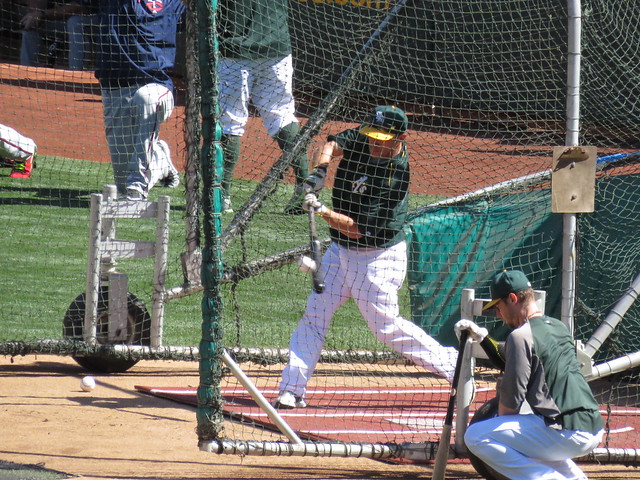 Before I move on to anything else, I need to share this adorable picture of my parents. 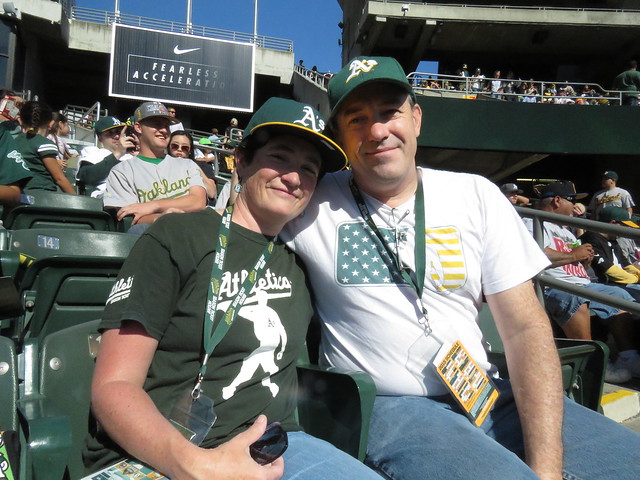 Before the game, the A’s honored their two representatives at the All Star Game, Stephen Vogt and Sonny Gray! 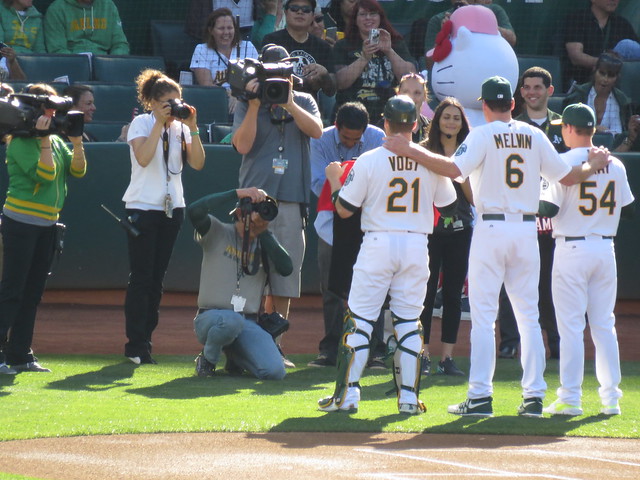 In case you’re wondering why Hello Kitty is standing near them, it was Hello Kitty A’s bobblehead day. Yeah…

Playing right field for the Twins was friend of section 149, Torii Hunter. 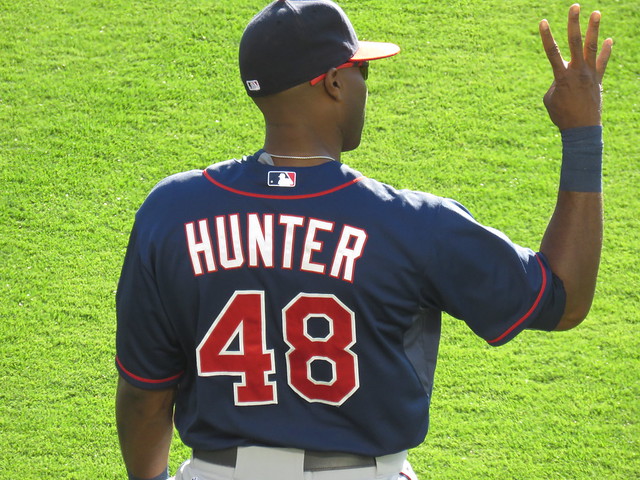 Why is he holding up 4 fingers? Because this day was his 40th birthday.

The game ended up going into extra innings and the A’s walked off in the 10th on a Stephen Vogt single that scored Billy Burns. The final score of the game was 3-2, with Oakland winning. 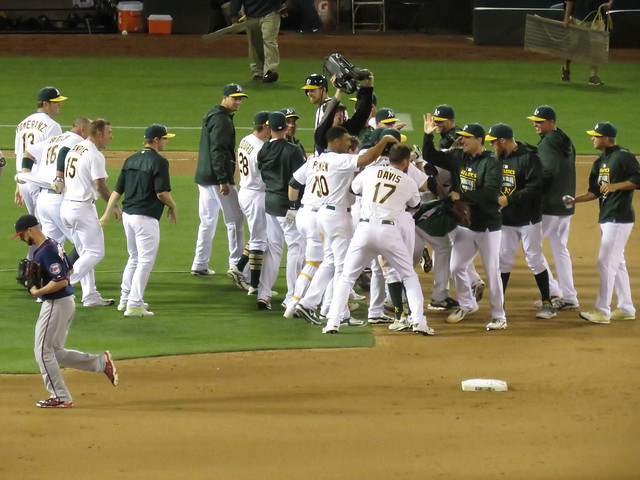 Before we left, I made sure to get a quick picture with my sister. Why is it from this angle? I don’t know. Is there a straight-on picture? Yes. Where is it? I have no clue. 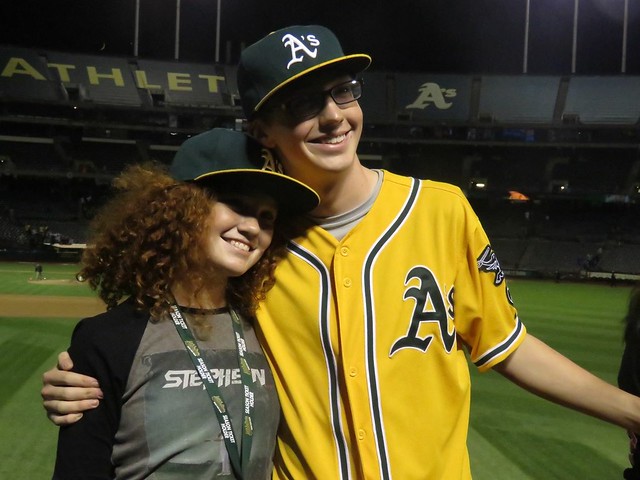 Even though this game wasn’t incredibly special, I still had a really good time. I snagged a ball and got to see friends and family while still hanging out with friends from camp. After one more week of camp, I’d be back home to rest up and get ready for a massive A’s homestand, with the first two games closing out the month of July.

For the most part, this was a pretty uneventful game. This was a Thursday night game in July against the Indians with a whopping attendance of 13,173. Considering the Coliseum has a capacity of 35,067 before standing room, that means that 38% of the tickets for sale actually sold. I’d guess less than 10,000 people were actually at this game.

But, anyway- BP! The gates only opened 90 minutes before first pitch, so I only got to see 3 round of Indians BP, lame BP at that. Thankfully though, Bryan Shaw tossed me a ball, so I was not shut out! 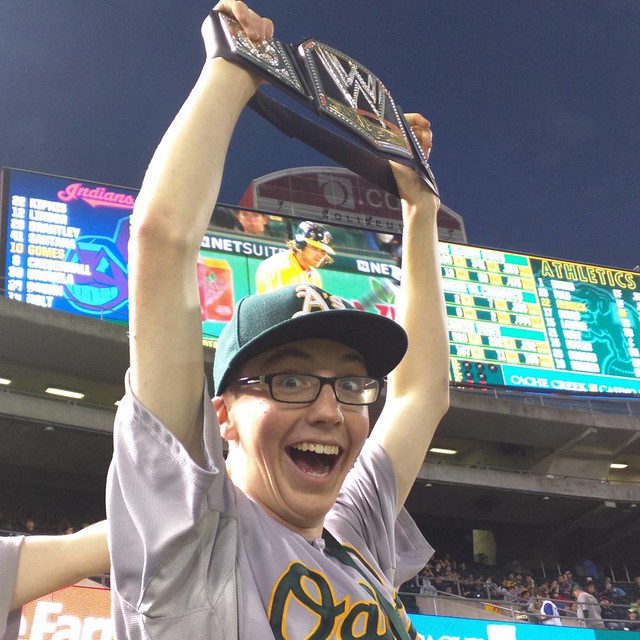 I was holding a WWE belt because Josh Reddick was hitting and as you can tell, I was VERY excited.

Before I talk about anything, I ‘m going to share this picture of my mom and dad. It was their 22nd wedding anniversary, so they bough matching Josh Reddick #22 shirseys and wore them for this game. They’re cute. 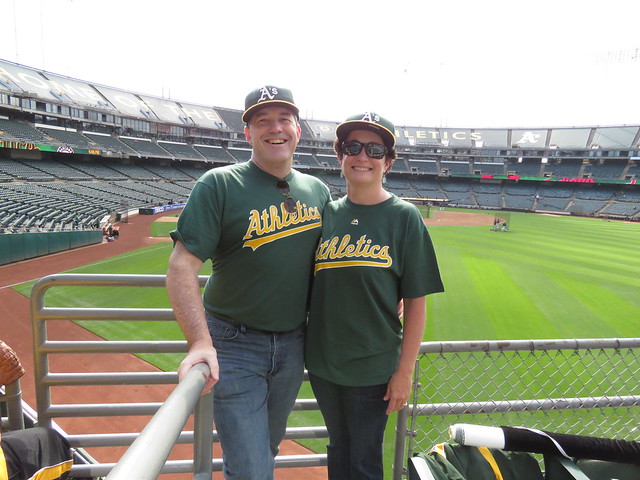 A’s BP ended almost right after I got inside, so I went down to talk to Mark, who I hadn’t conversed with in nearly two months. 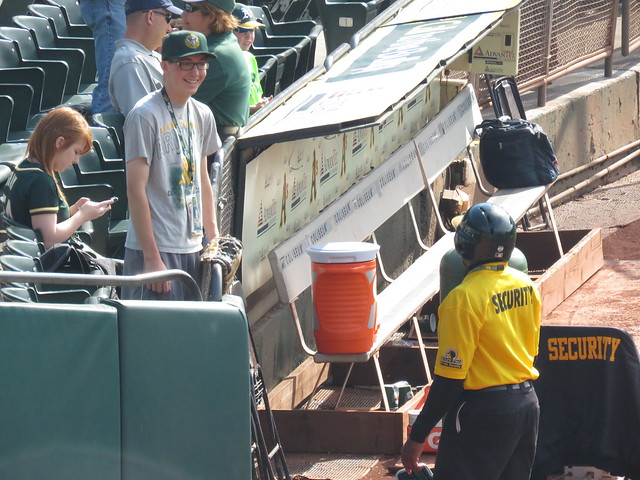 Then, I went to the outfield for Indians BP. 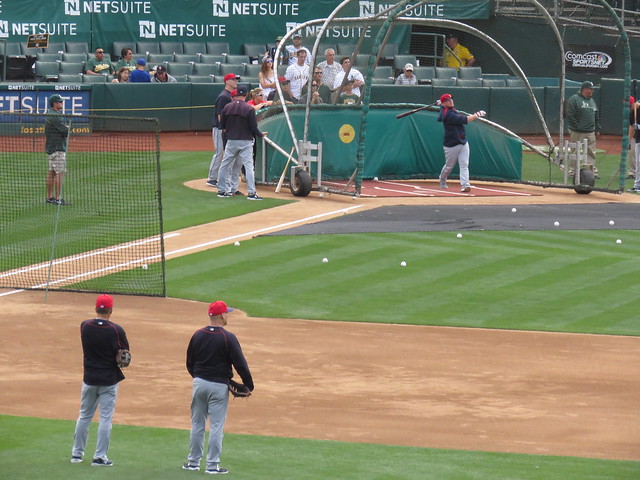 It was bad BP. I didn’t enjoy it. I didn’t snag anything. I could make excuses, but I won’t. I was shutout, I’ll move on. Here’s a picture of Brett Lawrie. 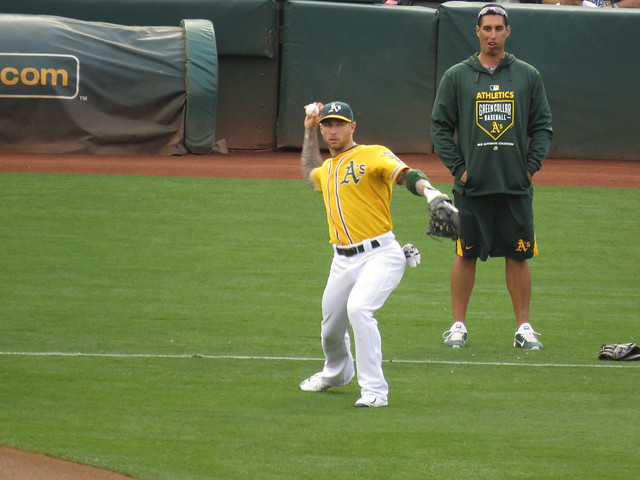 And here is a picture of Pascale and I waving our flags before the game. 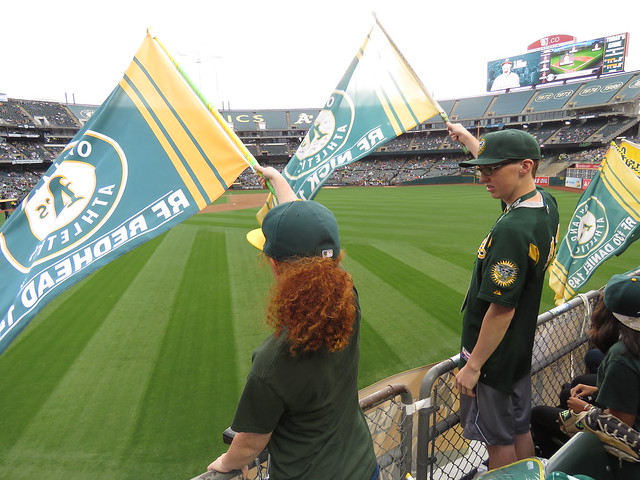 If anyone knows where I can get these A’s logo stirrups, please let me know. Because Billy Burns rocks them like a boss and I really want a pair. 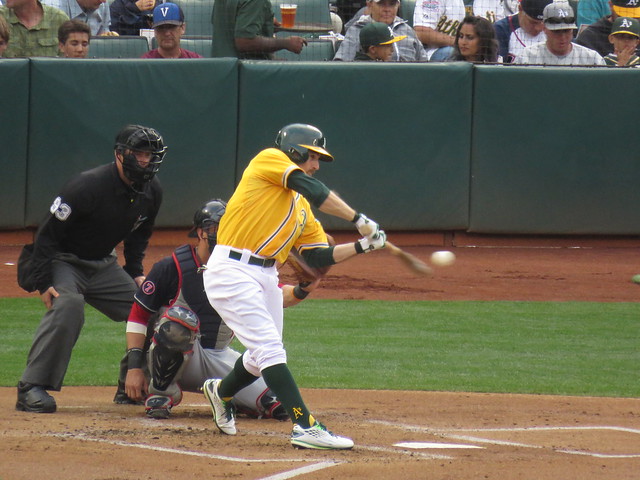 I mentioned Brett Lawrie earlier so I’m going to come back to him. I love watching him play. I love his hustle and energy, it’s all so great. 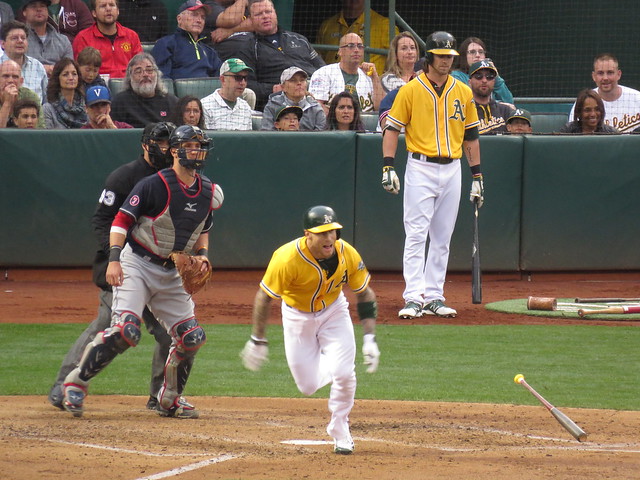 Kendall Graveman was the A’s starting pitcher in this game. 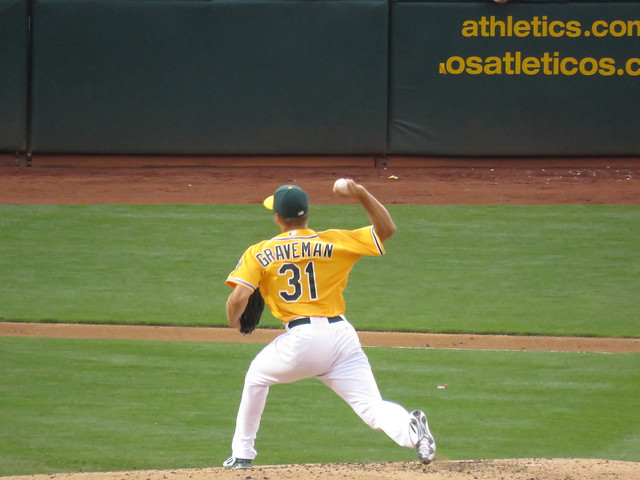 That’s about all I have for the game itself. This was another fireworks night, which was neat since it was my mom and dad’s anniversary. They enjoyed the fireworks from the tip tip of the stadium in the 3rd deck. 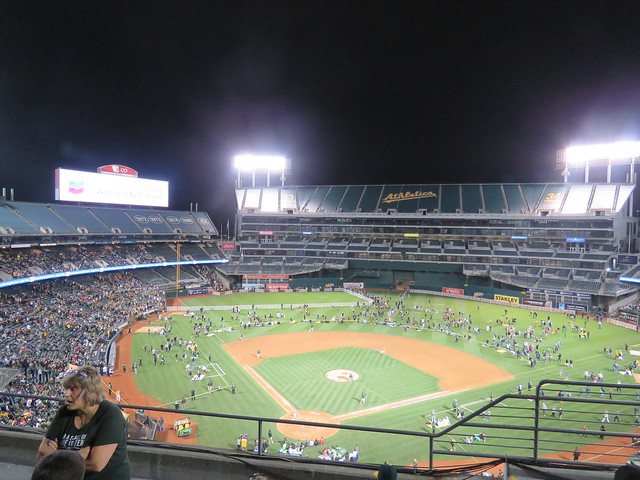 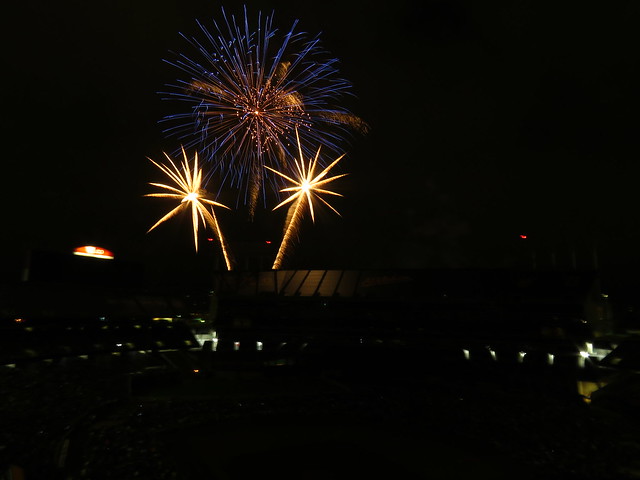 July was weird. I went to 4 games and snagged 2 balls. This will definitely be my shortest 2015 recap post, but don’t worry, the next one will be long! My next post will be about the games I attended in August, I went to 13 games in Oakland and 3 Minor League games, so there will be lots for me to touch on in my next post. After August, I’ll have an entry about September and then I’ll give you guys a recap from A’s FanFest, which took place in January of 2016.

As always, thanks again for reading and stay awesome!

Nick Badders is a blogger for MLB.com. He writes the blog, 7000 Coliseum Way, and you can follow him on Twitter or Instagram at @RFNick149. This blog entry was not subject to the approval of Major League Baseball or its clubs.