Who is Nick Badders?

So who is Nick Badders? Well, he is a 17-year old High School senior living in the San Francisco Bay Area. He has season tickets for the Oakland A’s and sits in Section 149 of the Right Field Bleachers at the Oakland (I refuse to call it O.co) Coliseum. Over his lifetime, he has snagged 185 Major League Baseballs and 165 Minor League Baseballs.

Now that I’m done talking about myself in third person, I can talk about this blog entry. It’s been a while since I’ve done any blogging. In fact, I only posted once in 2015 and before that, my last post was in JUNE of 2014. Ouch.

I thought I would re-introduce myself, since most people either probably forgot who I am, don’t know who I am or don’t care a single bit, they’re just here because this is another ballhawking blog. I thought I would do this introduction in the most obnoxious way possible by writing in third person. If you didn’t choose to leave hardcore judging me, I applaud you.

You’ll have to forgive me, it’s been a while since I’ve done any blogging (or even writing really), my skills and sense of humor are incredibly rusty, so you’ll need to be patient with me as I attempt to climb up the ladder to the diving board and dive back into the pool that is known as MLBlogs and 7000 Coliseum Way.

Well let’s see. What have I done since we last saw each other? My ballhawking in 2014 was not incredibly notable. I snagged 44 MLB balls in 27 games, which is a weak average of 1.63 balls per game. I didn’t snag any games balls and I missed nearly two months of games because I was working on staff at a Boy Scout summer camp. On the Minor League side of things, 2014 was good to me. I finished up 2014 with 47 balls in 10 games. While that may not seem like much, 32 of them were game balls, which is like 70%. My efforts on the Minor League level earned me the MyGameBalls.com Minors 2014 Junior Ballhawk of the Year, which is an incredible honor. Click on the picture below and it will take you to the entire article on MyGameBalls.com! 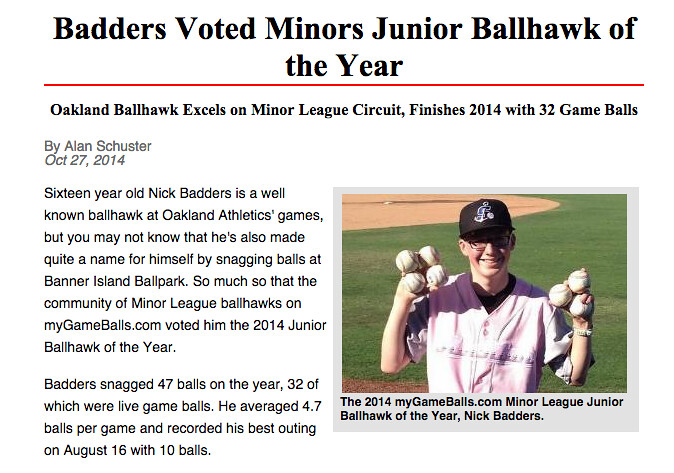 Towards the end of the 2014 season, I stopped taking pictures at many games. It just wasn’t as fun for me anymore, which is part of why I stopped blogging. I just needed a break. That being said, I do still have pictures from the 2014 season. I’ll share some with you now, so that you feel all caught up with what you’ve missed, beginning from the first game I didn’t blog about.

The 2014-15 offseason was somewhat eventful for me. The A’s made a bunch of trades, which I’m not particularly in the mood to talk about. The fine folks at BART hooked me up with the banner, which hung in one of their stations during the 2014 season. 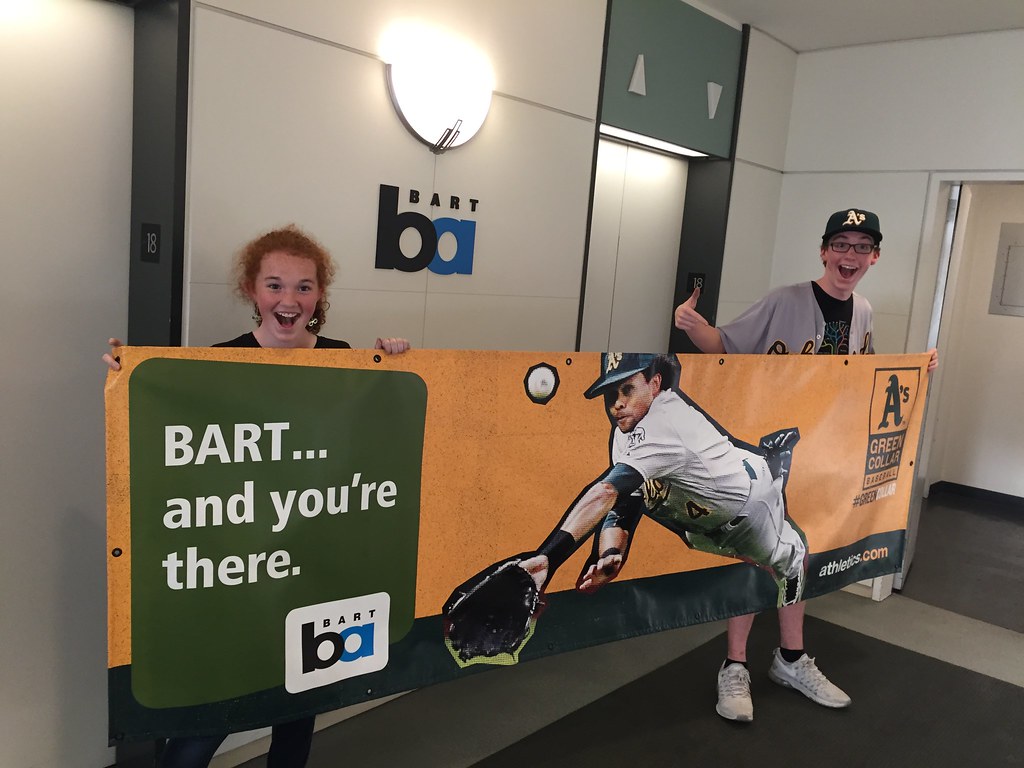 I went to the A’s 2015 FanFest, which was super awesome. Highlights of that? It was rainy and the field was all messed up from Supercross. Also, one of the scoreboard was missing and the other was in the process of being taken down

Also, I got to participate in A’s BlogFest for the 3rd year in a row. 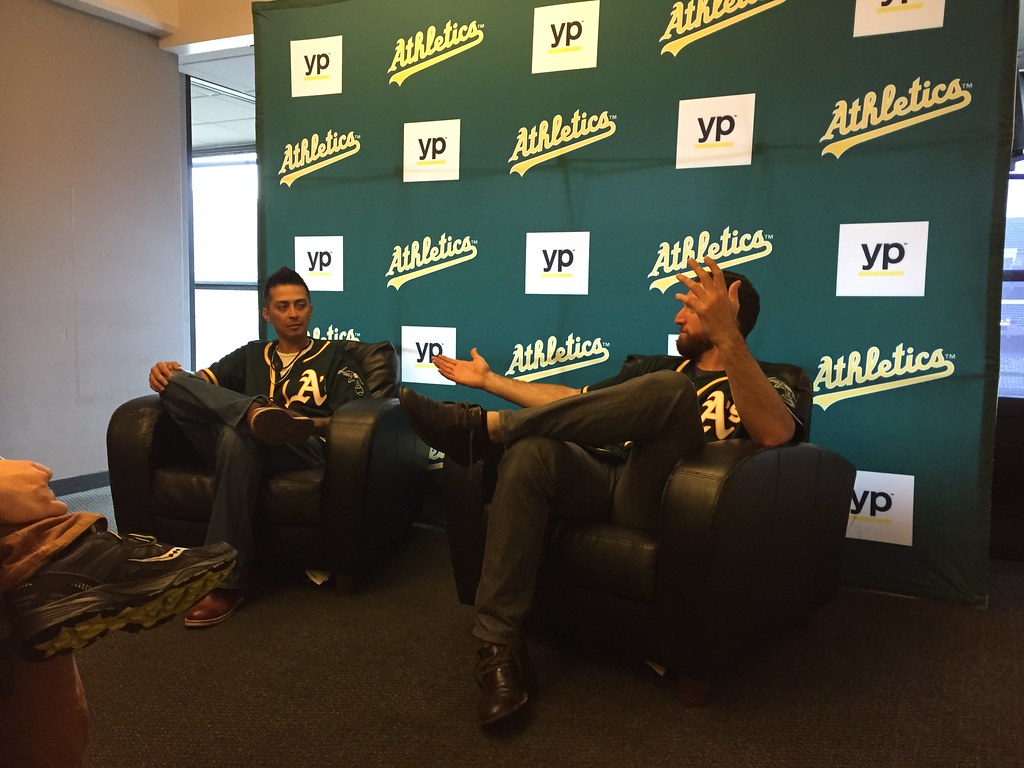 I got to see a lot of awesome friends. 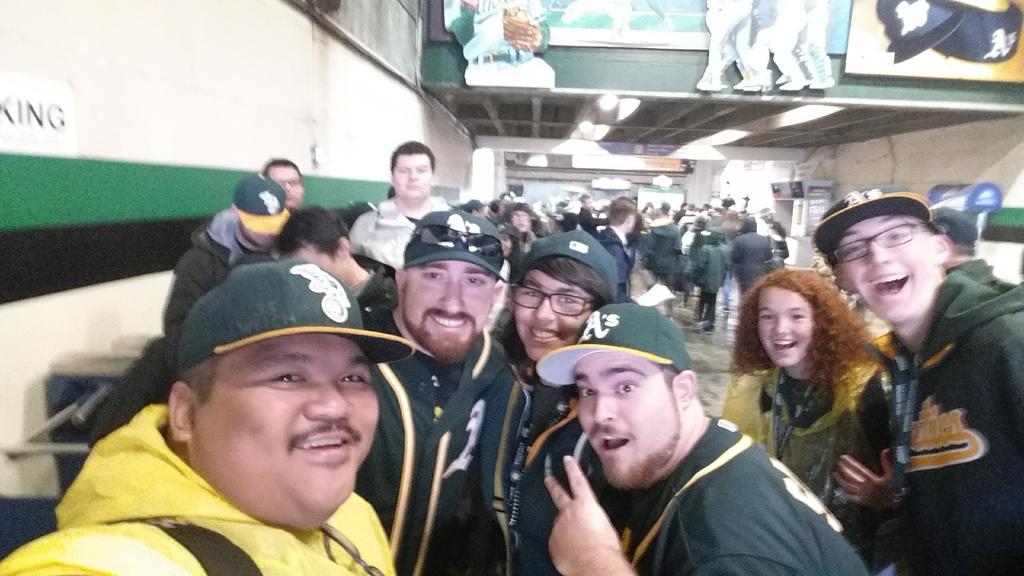 And I picked up a lot of cool stuff from the A’s Memorabilia Sale. In the picture below, you’re looking at (in no particular order, just try and follow along) Daric Barton and Nick Punto game-worn jerseys, a pair of throwback A’s pants, a full set of green and gold catcher’s gear, a blank locker nameplate from the 2012 season opener in Japan, a pair of throwback stirrups, a Stomper bobblehead toothbrush holder (the A’s 2014 kids club kit), a game-used catcher’s mask and underneath that, I have a black helmet, like the one the base coaches or catcher would wear. 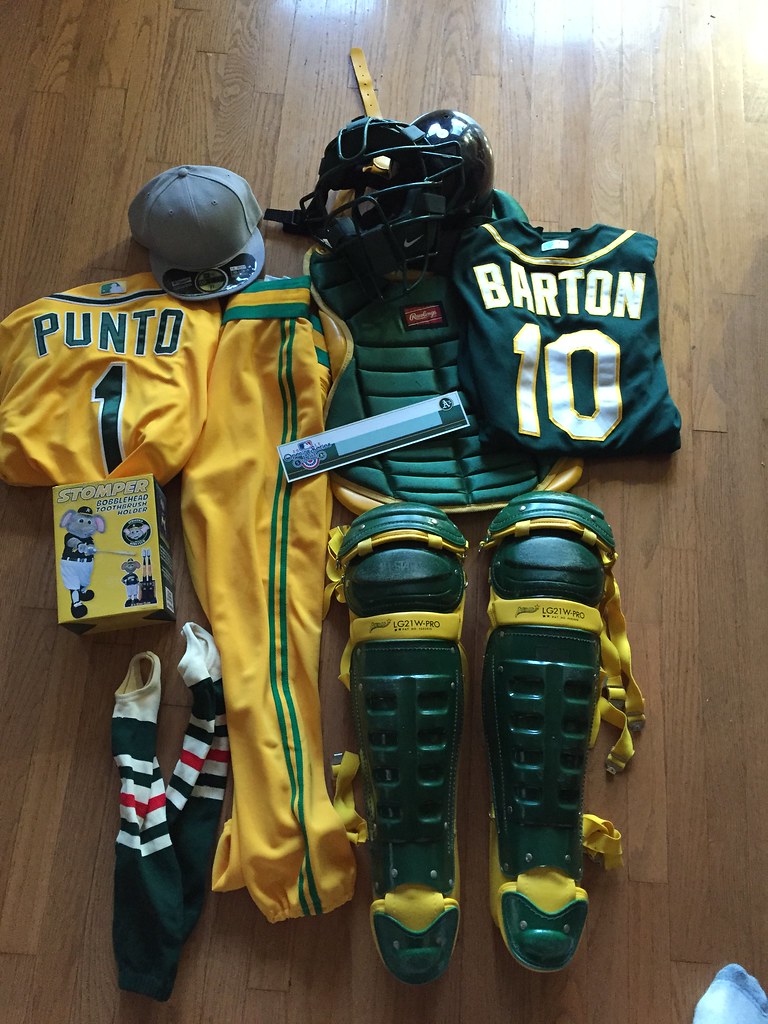 Right before the season ended, my family and I flew down to Arizona for Spring Training. I snagged 7 balls in 5 games and we had a super fun time. I even got to see Will Ferrell play for the A’s.

I even had a conversation with Will. My big glove and I were then featured (there was a one-second clip of me) in the Ferrell Takes the Field documentary, which was awesome. 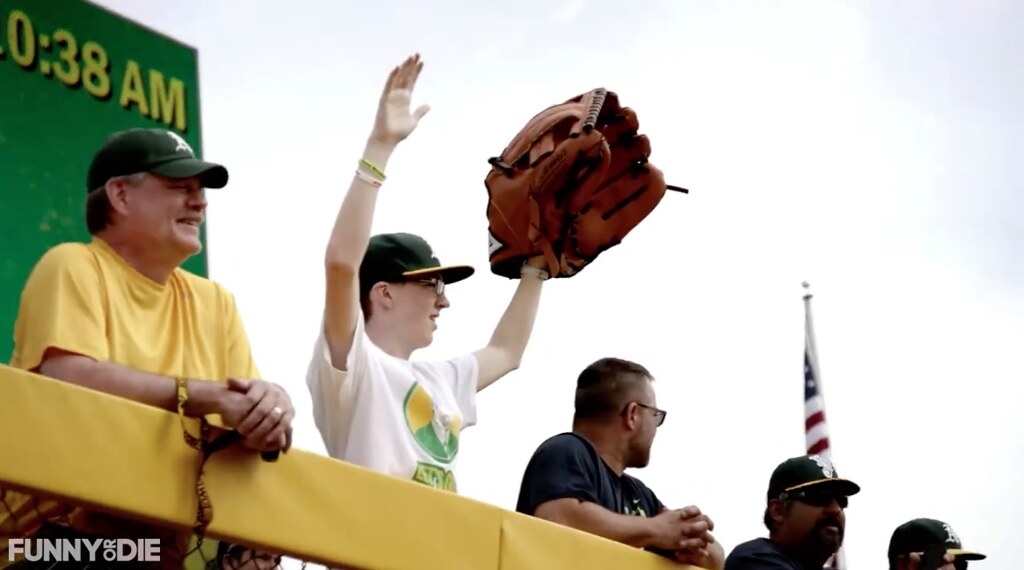 Getting into the 2015 season, I went to a couple of the Bay Bridge Exhibition games. I ran in the inaugural A’s PlayBall 5k. I met Astros reliever Pat Neshek (my all-time favorite relief pitcher) and got his autograph on a few items. Oh and I snagged a game home run. 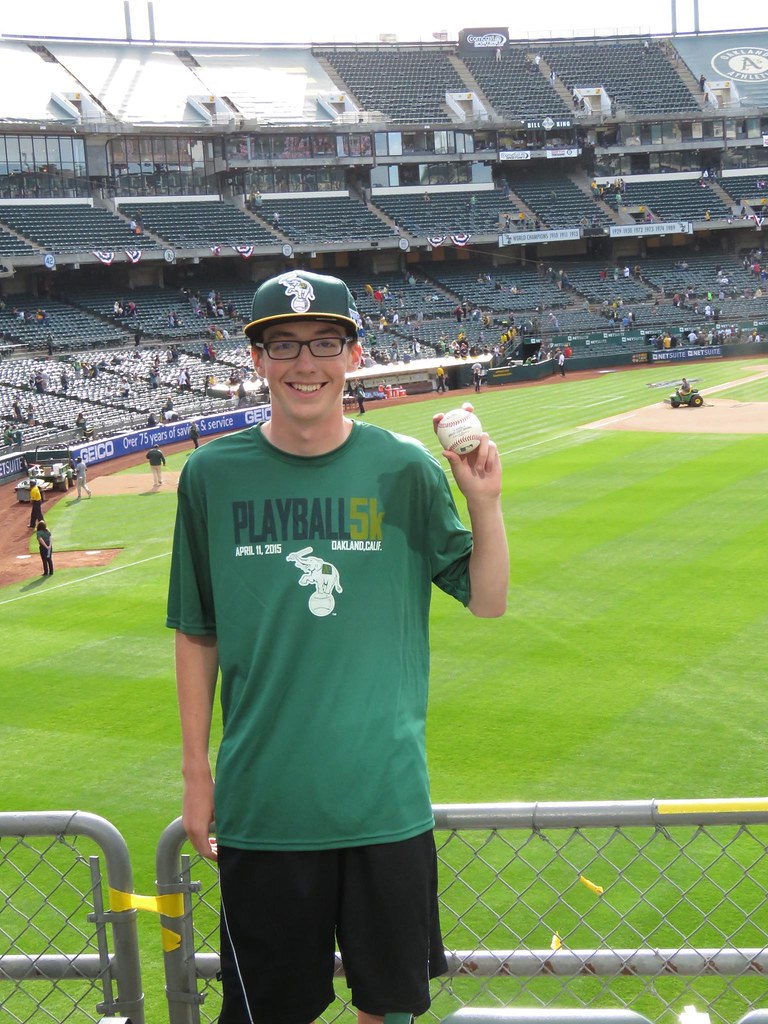 Now I’m guessing you’re wondering why I’m only skimming over a lot of this stuff. A lot of cool things happened, why am I not talking about them? My plan for the month of January is to recap for you all what I did in 2015 during the baseball season. I am going to do a separate entry for each month (or months), including pictures, highlights and stories from my adventures at games. I don’t have a schedule because I don’t want to stress myself out, but I do have a list of the entries I want to write:

You’ll notice that there is no June, I skip straight from May to July. Like I did in the summer of 2014, I spent the summer of 2015 working on staff at a Boy Scout Camp. As a result, I didn’t go to a single game in June, I didn’t do anything baseball related, which makes an entry about that month kind of pointless. While I’ll be going more in-depth on each month, I will share with you some highlights from the rest of the season.

In May, I started dating a beautiful girl named Kimberlee, who also has season tickets and sits in the Right Field Bleachers, which is how and where we met. If you want to, you can follow her on Twitter or check our her blog. I recommend you do both though, she’s really awesome. A good portion of her blog focuses on WWE, but she does also write about the A’s, as well as life in general, it’s all a great read! 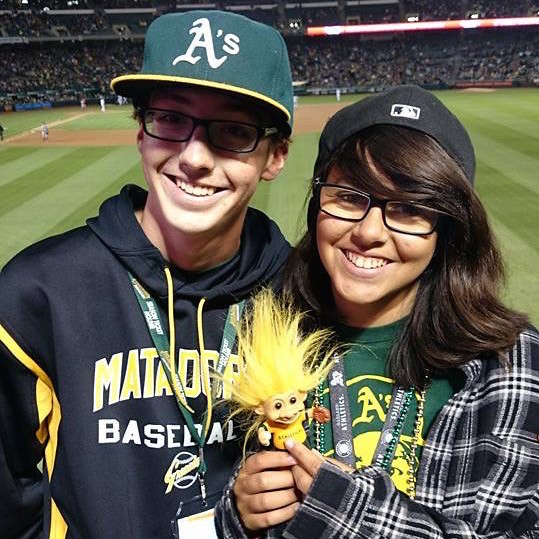 Late in May, Kimberlee and I created a banner for our favorite A’s player, Brett Lawrie. We did a couple of doubleheaders (A’s game during the day, Stockton Ports game at night) and we even got to meet A’s third baseman Brett Lawrie, which I will tell you more about in the August entry. I came close to a few other game home runs (but didn’t catch any) and even got to do an on-field meet and greet with a bunch of A’s players. Kimberlee and I took our banner design and turned it into t-shirts and stickers, which we sold to fans. All in all, it was a pretty awesome year. 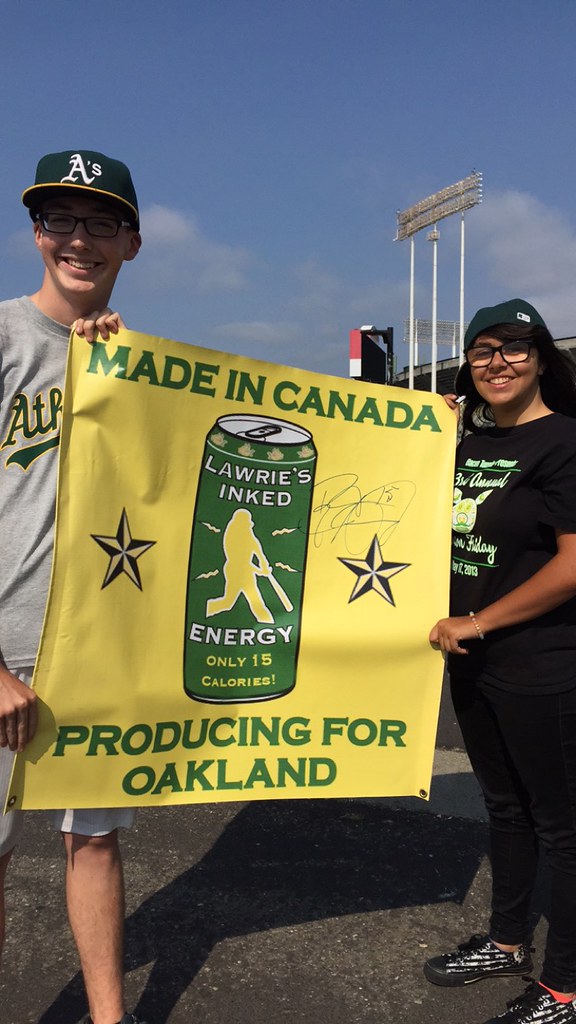 Those are just some of the highest of the highlights, there is plenty more that I look forward to sharing with all of you. I’ll be aiming to put an entry out every five or so days, but I cannot make any promises, I’ll do my best.

I have a lot to look forward to in 2016 and I cannot wait to share my adventures with you (yes, that does mean I will be blogging about games again). I have not decided what I am going to do for specific games, but I will let you know once we get closer to the start of the season. I plan to blog about A’s FanFest and if I go again, Spring Training.

Thanks for reading and I hope you enjoy my next post, where I will chronicle my adventures in Arizona with my family at Spring Training. Until next time, stay awesome.

Nick Badders is a blogger for MLB.com. He writes the blog, 7000 Coliseum Way, and you can follow him on Twitter or Instagram at @RFNick149. This blog entry was not subject to the approval of Major League Baseball or its clubs.