Coco Lean bobblehead day! I knew it was going to be crowded. For this reason, I chose to not put much effort into ballhawking at this game, so that I wouldn’t be disappointed if I didn’t snag a ball.

This would be a game featuring myself, my mom, and my sister, Pascale.

You think that’s crazy? Check this out:

Yeah… It was over 5 hours before game time and there were that many people in line to get into the Coliseum grounds!

Guess who was near the front of the line?

I went over there and joined them, hoping to be able to get to the front of the line at MM.

The BART Ramp gate opened at 8:15. As soon as it opened, everyone started running towards LL and D, to the right side. Since I was near the front, I broke off towards MM. I jumped over the short fences keeping the line in place, and was first in line. All of the right field bleacher people started throwing their backpacks at me! A few people threw flags and such, but more importantly, we were first in this line. 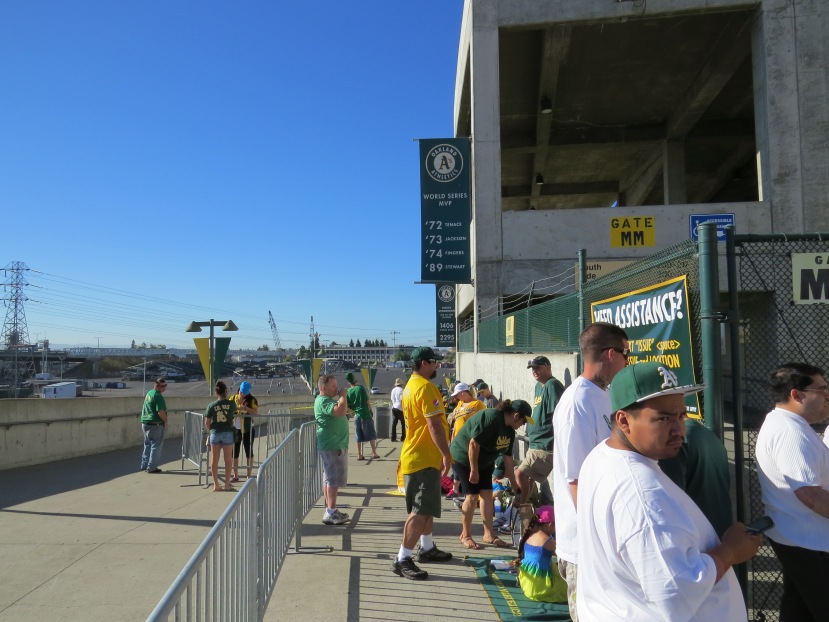 When I say party, I truly mean it. The line just kept growing. 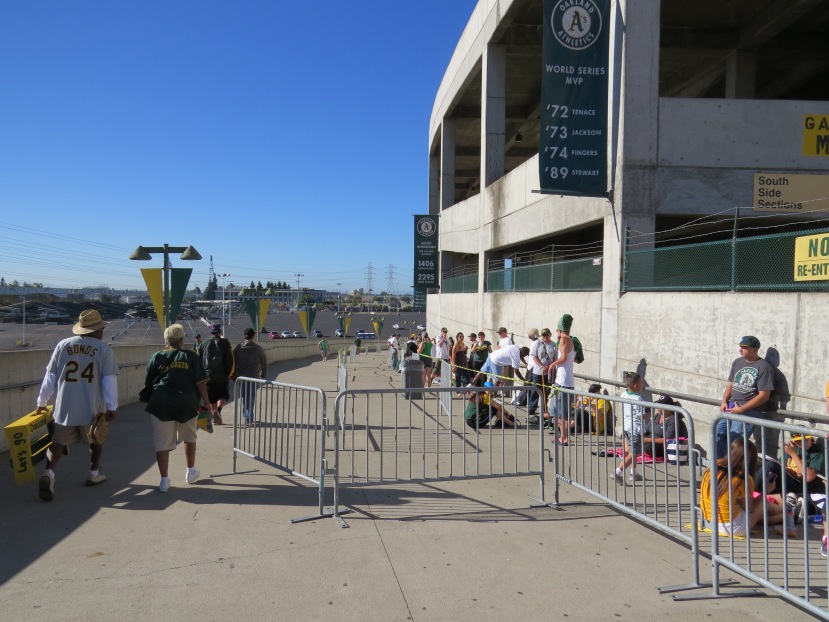 Pascale and I took off around 8:40 to take a lap around the stadium and scope out the other lines. Here is the Gate C line.

As we walked past the gate, I saw something that caught my eye.

It was WIDE OPEN. Yeah…

I considered for a split second going inside, but decided against it for obvious reasons.

We kept walking, up towards the season ticket holder entrance, where there was already a decent line.

The A’s were preparing very well. They had the line set up to snake towards the Oracle Arena. 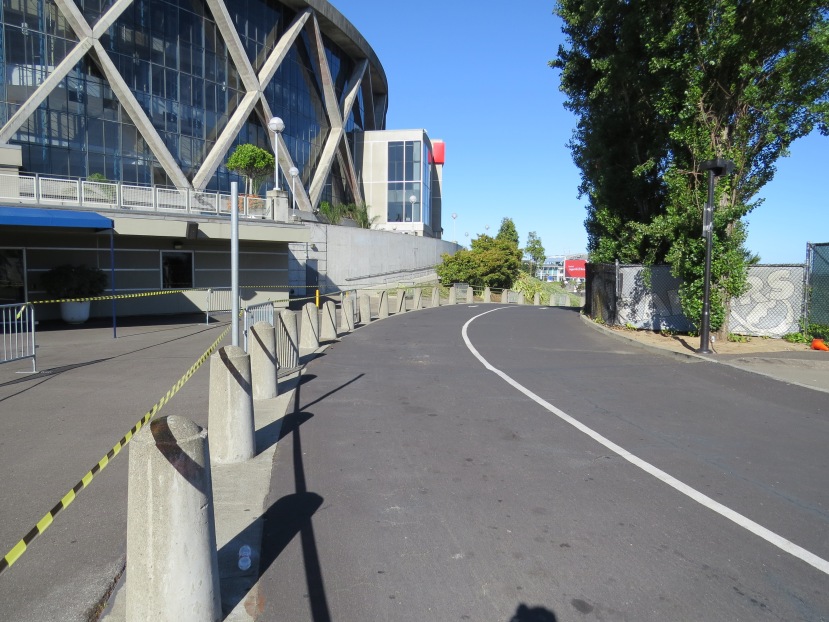 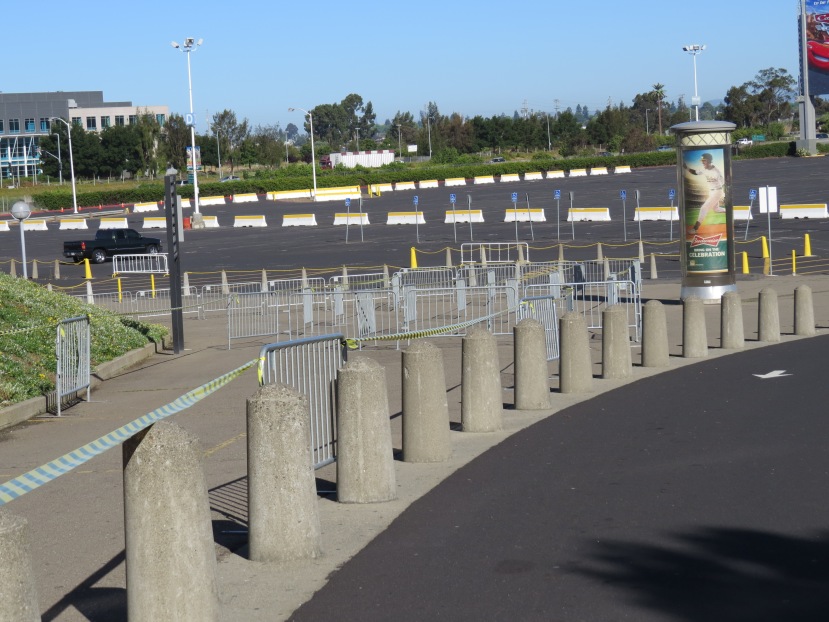 As we were walking towards Gate D, we took a quick peak at the player parking lot. Nothing fancy.

The line at Gate D was HUGE!

When I say huge, I mean HUGE! That picture does not do justice.

Here is a quick peak at the line at this time. 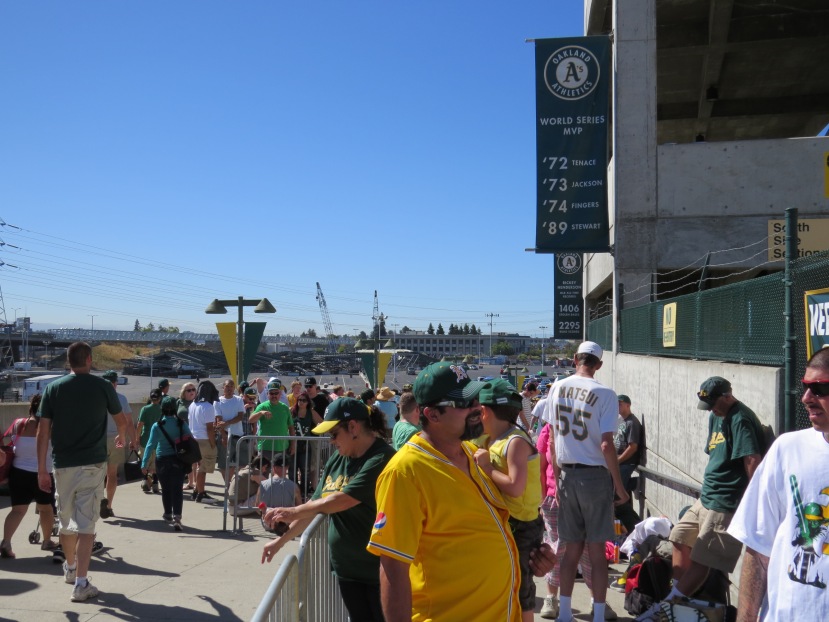 Everyone was having a “great” time at the front of the line. It was very hot and there were a lot of us. Pascale spent some time playing with Cara Miller’s son Ian. 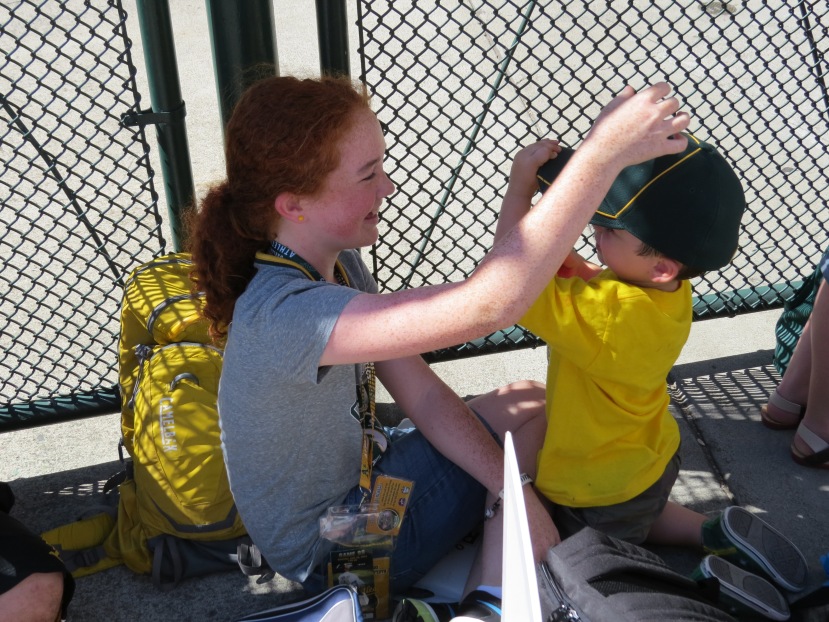 I was clearly very excited.

We were all “enjoying ourselves.”

At 10:40, just 25 minutes before the gates were supposed to open, I got this picture of Will.

That picture pretty much sums it all up.

This was the scene. Pure CHAOS!

This was the line from MM. I was standing in the parking lot when I took this picture. 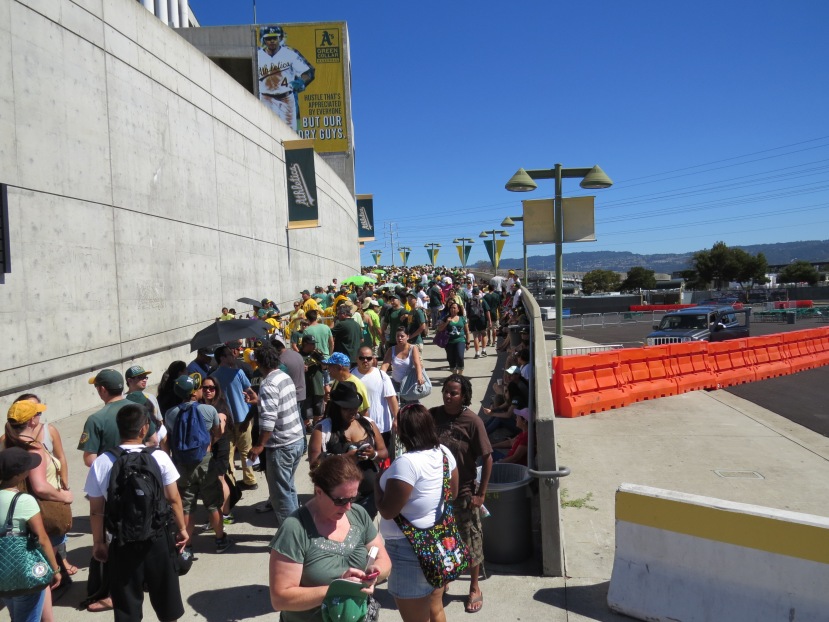 The line extended INTO the parking lot. 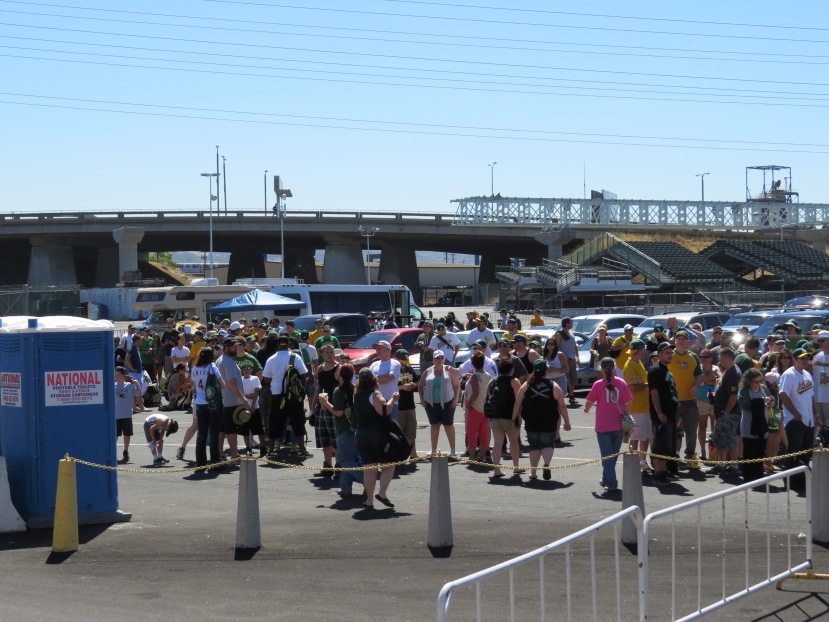 I’m  not even at the back of the line here.

The sea of cars amazed me.

Nothing was going on for the first 15 or so minutes. 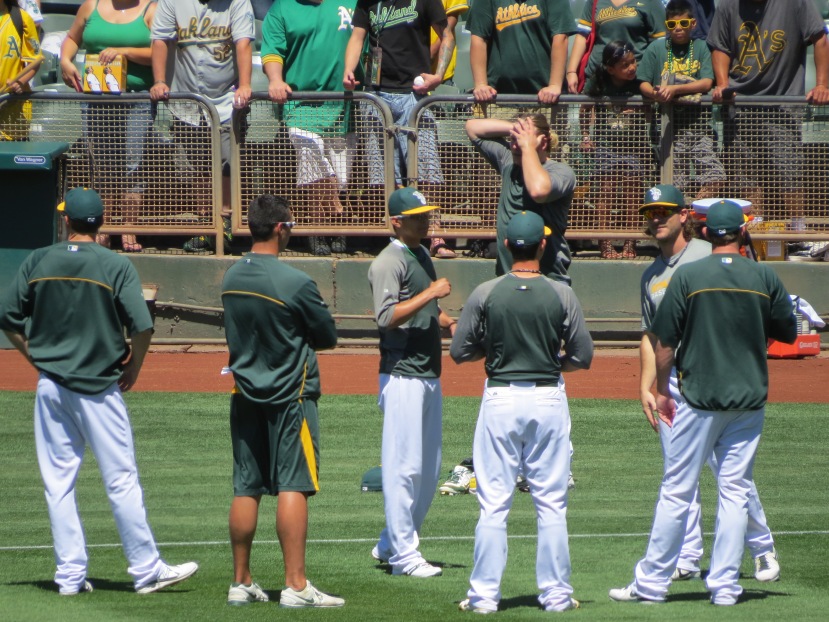 They eventually started throwing, but by the time they were done, the Cardinals had all left the field. I had many many attempts for a tossup from an A’s player, but failed. I left the LF corner to head elsewhere.

This all happened in a span of 25 minutes at most, so I was all but positive that I was going to be shutout.

I went over to the A’s Kids Club table with my sister, then headed back to the bleachers. At this point, I met up with Taylor Fernandez and her brother. We talked for a while, then walked around the concourse. I got back to the bleachers about 20 minutes before first pitch.

Matt Holiday, former Athletic was in the starting lineup.

He was among the Cardinals players stretching along the RF line. 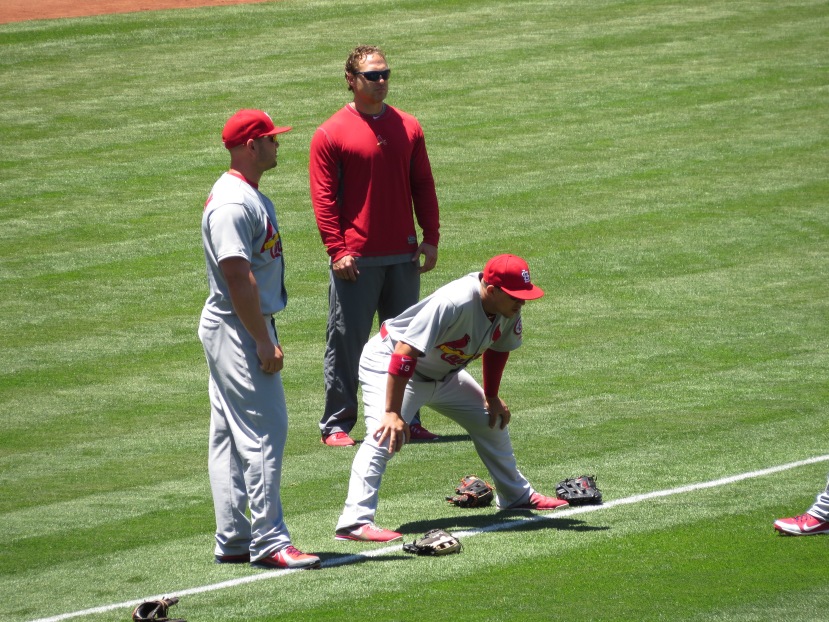 Jarrod Parker, meanwhile, was warming up in the A’s bullpen.

He was being caught by Derek Norris.

As the players were finishing up warming up, IMD and ATM, the guys behind the song Bernie Lean had a short performance on the field, ending it with Bernie Lean. I videoed the performance, but now I can’t find the video. Sorry! I’ll update this entry if I do find it.

This was my view just before the national anthem.

Right as the national anthem began, this began to fly over. 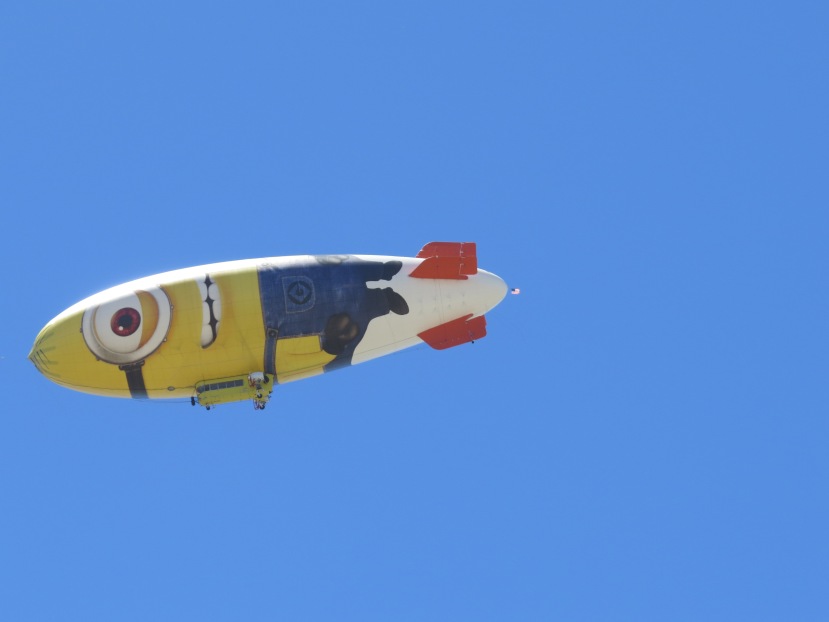 On the bright side, it is providing arial coverage!

Again, like I mentioned, Jarrod Parker was on the mound for the green and gold.

Oh, and one thing that the A’s have been doing for the past few weeks  is displaying fans’ tweets on DiamondVision. If you remember, my tweet was displayed back on Tuesday. Look what I came across this Saturday afternoon.

Yay! I think I got a couple of new followers.

In the 4th inning, there was a scare on the mound.

Jarrod Parker threw a 1-0 pitch to Allen Craig with 2 outs. Craig doubled on the 1-0 pitch to centerfield. However, on the pitch, Parker fell to the ground.

He ended up laying on the ground for a little while, trying to stretch out. It was later determined to be a hamstring injury.

He was then replaced with Jesse Chavez. 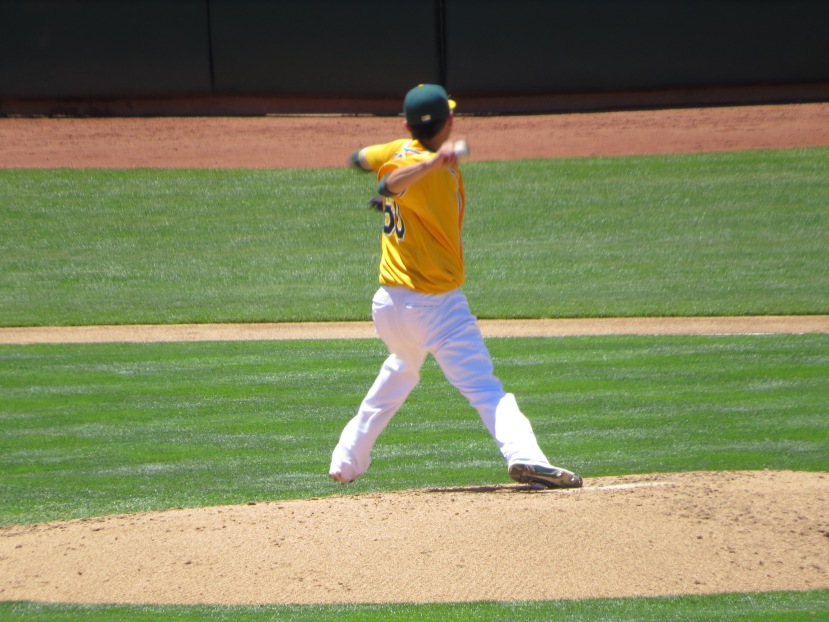 At the time, it was a scoreless game.

The infielders gathered in front of 2nd base and talked with Jim Joyce while Chavez warmed up. 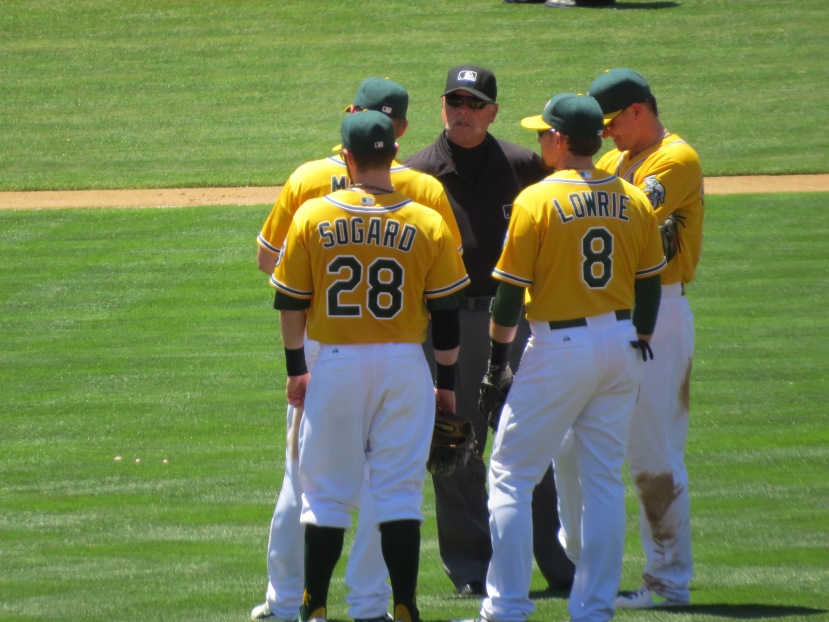 The outfielders talked as well.

I got this really cool picture of Yoenis Cespedes spitting.

After a number of pitches, Jesse Chavez was ready.

I then noticed that ATM and IMD were in 149.

Dan Ortero came in with 2 outs in the top of the 8th, when the Cardinals were ahead 7-0, with 4 of those runs being charged to Jesse Chavez, 2 of them charged to Jerry Blevins, 1 to Pat Neshek.

Oh… and he was wearing these awesome stirrups!

Nate Freiman stepped up to lead off the bottom of the 9th, with a 7-1 Cardinal lead.

He grounded out, then Yoenis lined out, for the 2nd out of the inning.

We were all hoping for some 2-out magic! 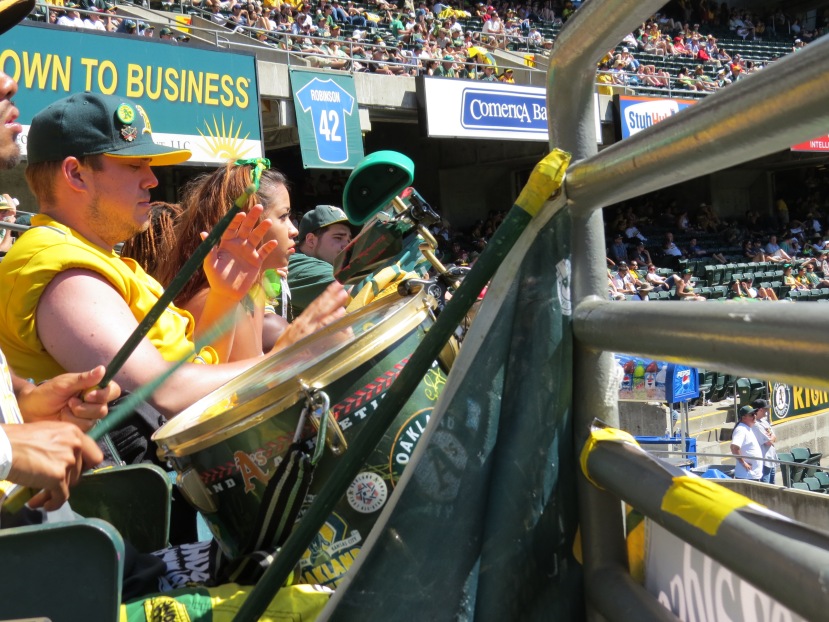 Adam Wainwright walked Brandon Moss, then looked to finish off the CG when Adam Rosales stepped to the plate.

Rosales popped out to 2nd Baseman Matt Carpenter to end the game, and that was it!

Sure the A’s lost, but it was certainly a fun day! Waiting in line, roasting in the sun, you can’t complain!

After the final out, ATM and IMD were posing for pictures with people in the concourse. Here they are with Will.

This was my last game for 2 weeks, as my next game was going to be July 14th against the Red Sox.