Before I left the house for this game, I checked Weather.com. It said there was a 0% chance of rain until 3pm, at which point there would be a 30% chance of rain. HA. HA. HA.

Today’s game was “Oaktoberfest Stein” day, as well as Season Ticket Holder Appreciation Day. If you were one of the first 10,000 fans to enter the stadium through any gate, you got the stein. However, any STH that entered through the STH gate got a special tumbler, along with a “Player Meet and Greet.”

My dad an dI showed up around 9:45 for the 11am gate opening. He got in line at the STH gate, I got in line at Gate B. My plan was either to join him just before the gates opened, or get to my seat right away at Gate B. Well, 15 minutes later, everyone was under the tents by the gate and the metal detectors. 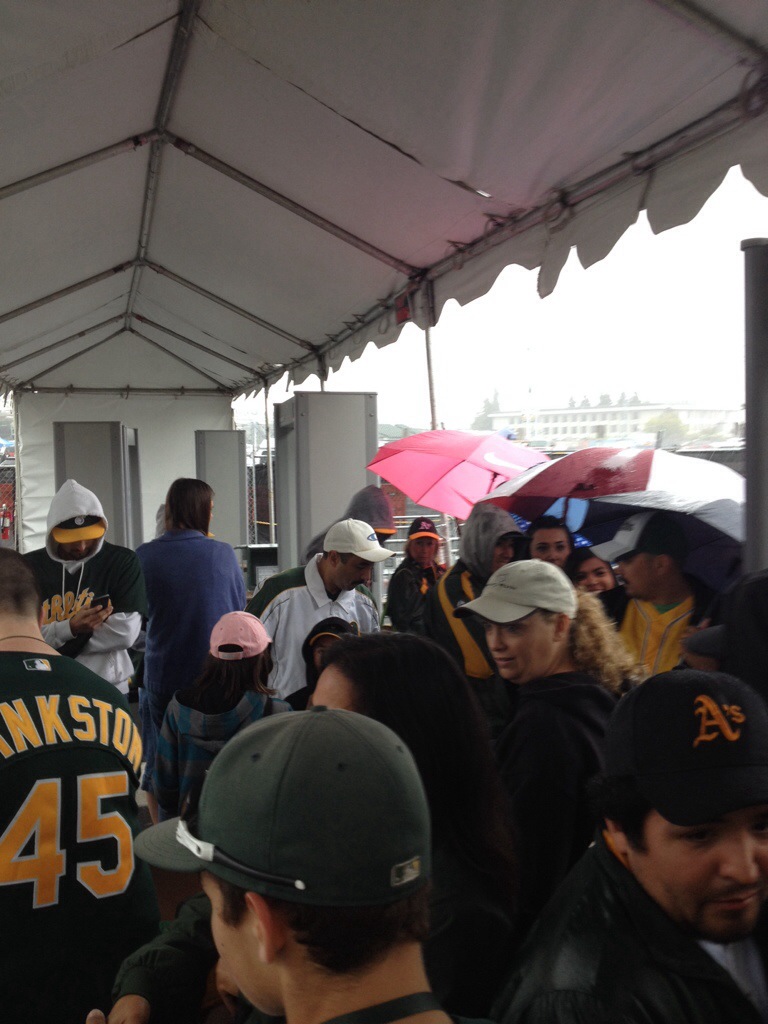 Can you tell why?

I stayed under the tent with everyone until about 10:45, at which point I headed off to the STH gate with Michael and Bryanne, who sit in 148. It was still pouring hard and fast, and there were puddles everywhere. We stopped at the team store, where Bryanne purchased a poncho and I wished I hadn’t left my wallet at home.

We then headed to the STH line RIGHT before the gates opened, where I was able to jump in line with them.

When they let us in at 10am, 5 minutes before all the other gates, A’s rookie pitcher Sonny Gray handed me my tumbler, as I entered the stadium on a red carpet in the pouring rain.

Once inside, I headed to the bleachers to check out the scene. WATER, RAIN, AND MORE WATER.

These pictures don’t do it justice. It was nuts.

Half an hour after the gates opened, it was still pouring. 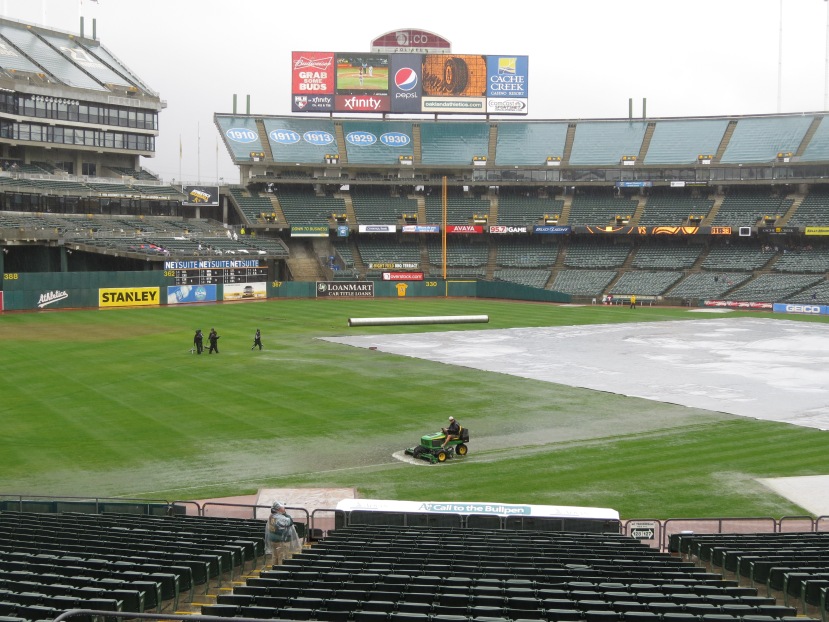 You could tell that the grounds crew was not having the best of times. 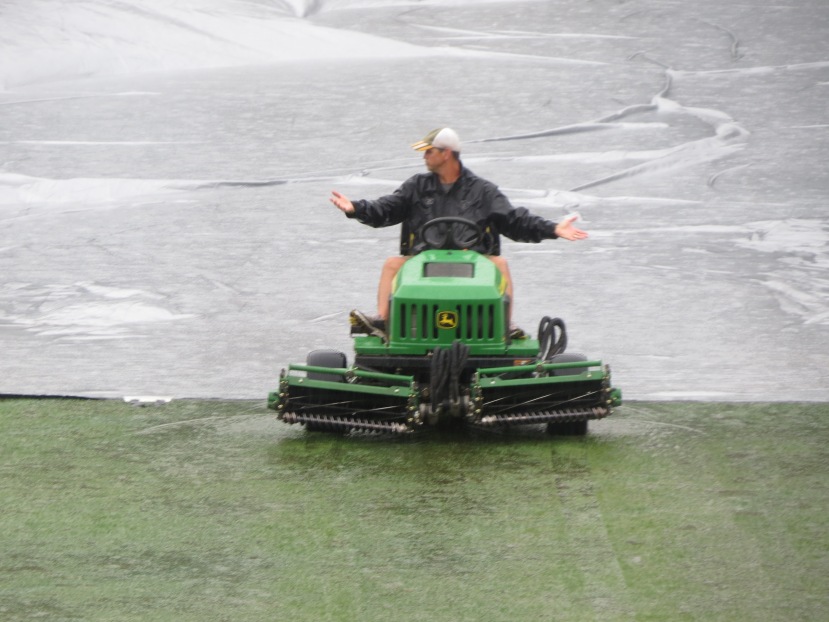 After I knew there was no point in grabbing myself a seat, I headed up to the Westside Club with Bryanne and Michael, where we met up with Daniel for about 20 minutes, before heading back down.

When we back to the bleacher concourse, we found that a bunch of 149 people had made a tunnel in the tunnel between 149 and 148. Every time someone walked to or from the bleachers, they all stuck their arms up and cheered! It was basically a rain delay version of the A’s HR tunnel.

While the tarp was still on the field, and it was still beating down hard, I took time to go out and get a picture for the MyGameBalls.com Photo Scavenger Hunt!

Now I’m only 12 points behind Todd Cook and his sons!

The tarp was still on the field, it was still pouring.  Bleh…

At this point I figured I was almost guaranteed to get shut out.

However, the vendors were still out in full force! 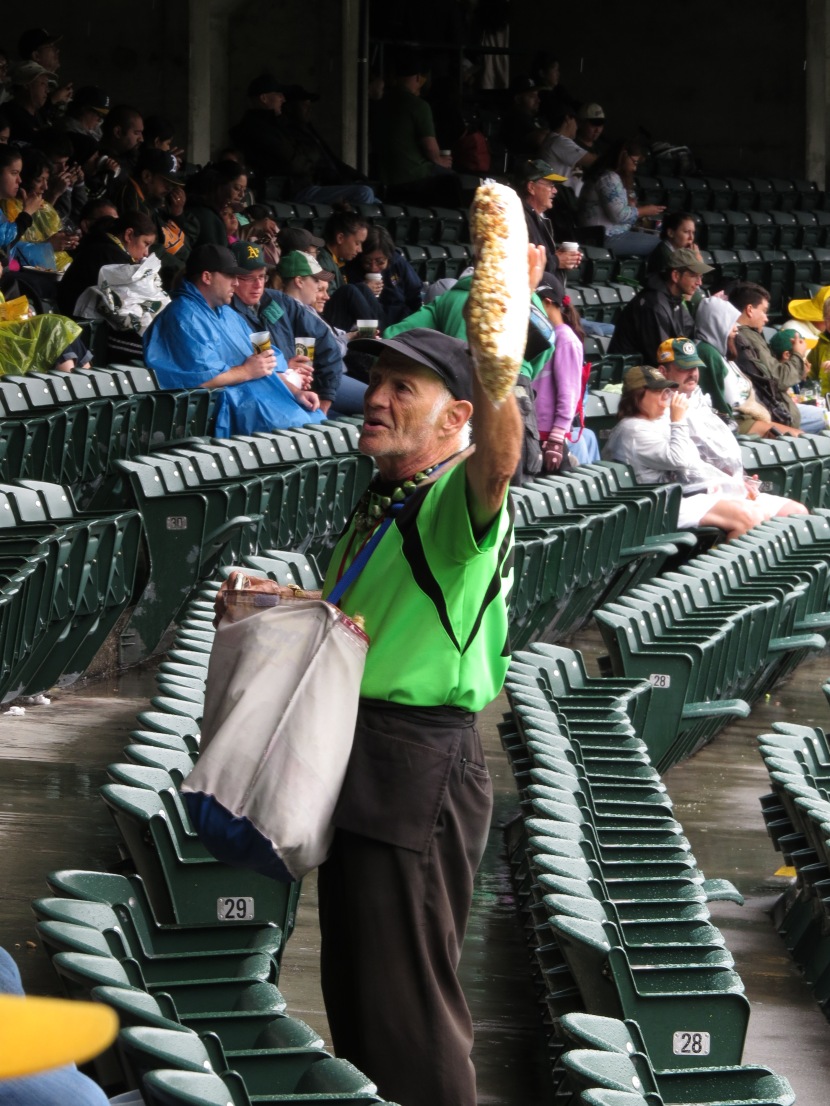 I literally spent most of the rain delay in the concourse hanging out with people. There was nothing else to do. At one point, the A’s pitchers did come out to throw.

But I was unable to get close down to the point where I would be able to get a ball. 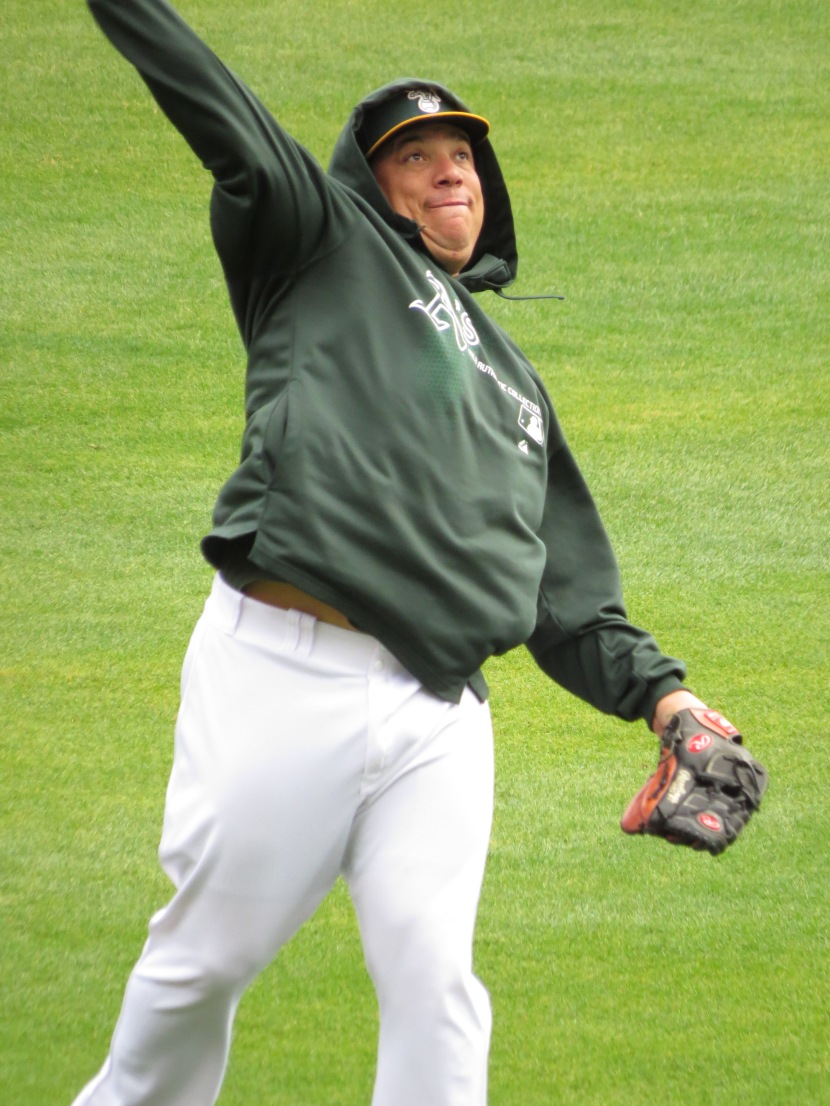 I tried to get down there, but since so many people were in their seats (which absolutely shocked me), ushers were checking tickets…. WTF??

Just to show you how wet I was getting, here’s a picture of my hand.

It was WET WET WET! 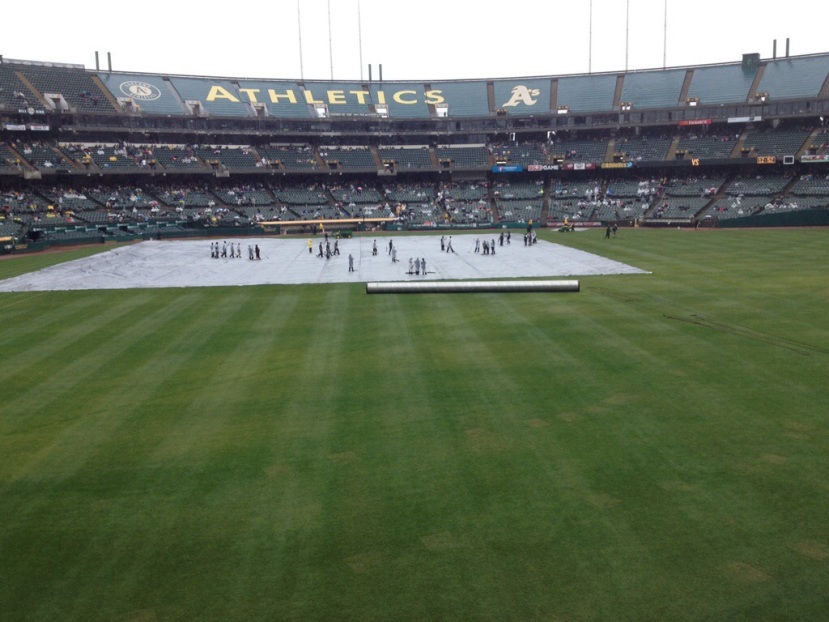 Eventually, it was announced that the official start time would be 3pm. Sure enough, 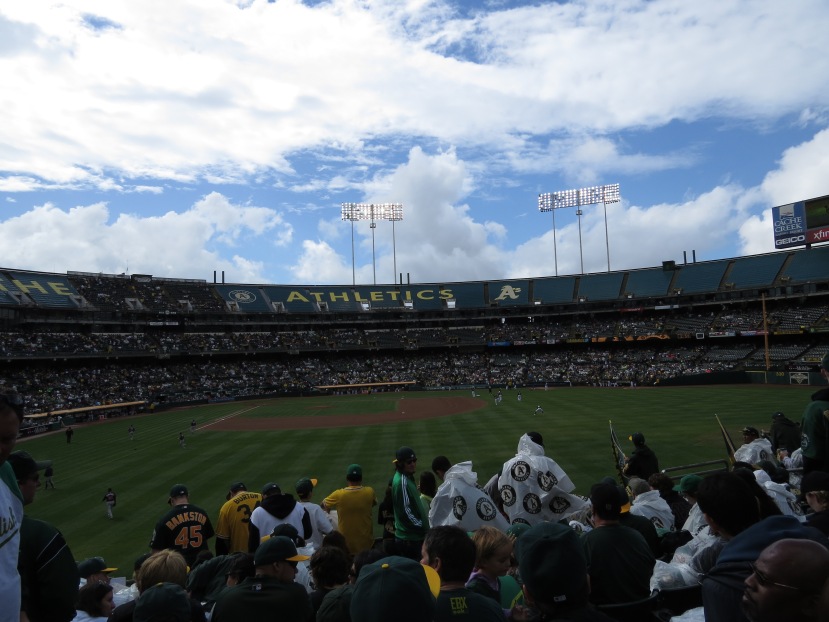 Jarrod Parker was on the mound for the Athletics.

Like the night before, the Twins offense was pretty much silent. 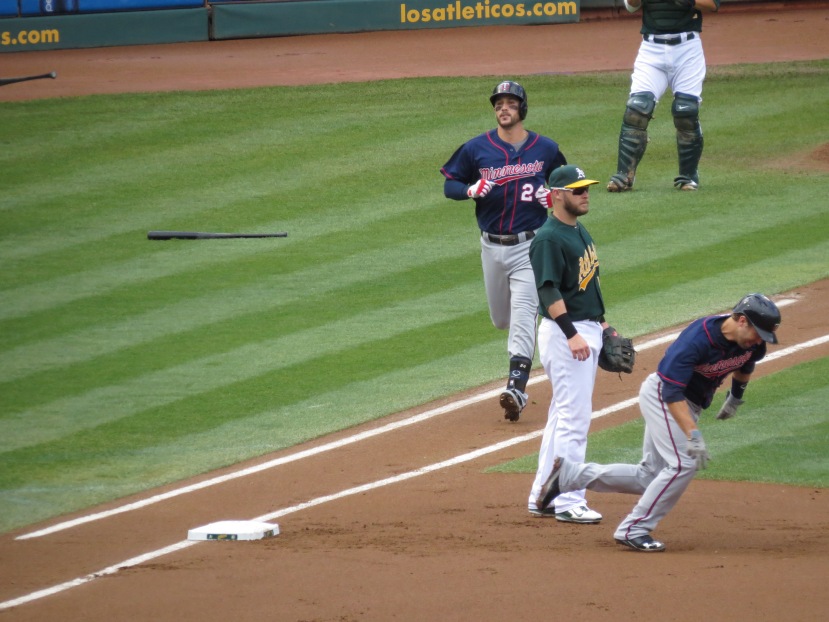 Pedro Hernandez was on the mound for the Twins. 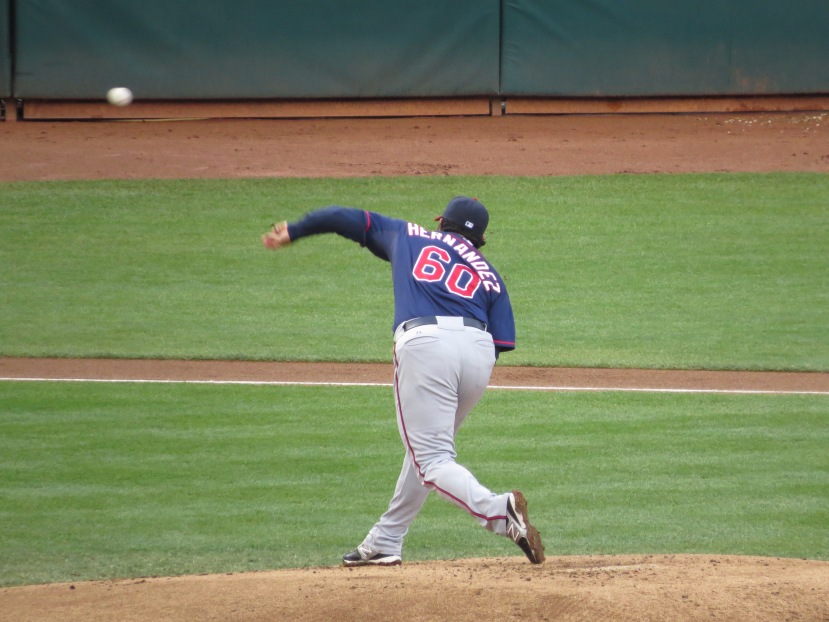 Josh Donaldson was a huge part of the offensive explosion, with a single in the 1st and a double and run scored in the 2nd inning.

It was a lot of fun to watch! 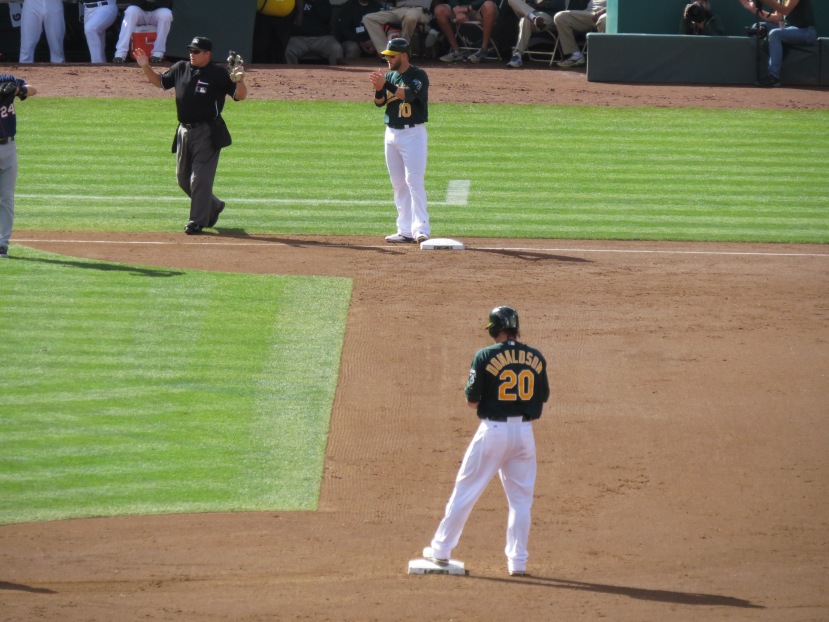 Omar and Rhema were enjoying the game!

As was Stomper, who was dressed in a special costume for “Oaktoberfest” 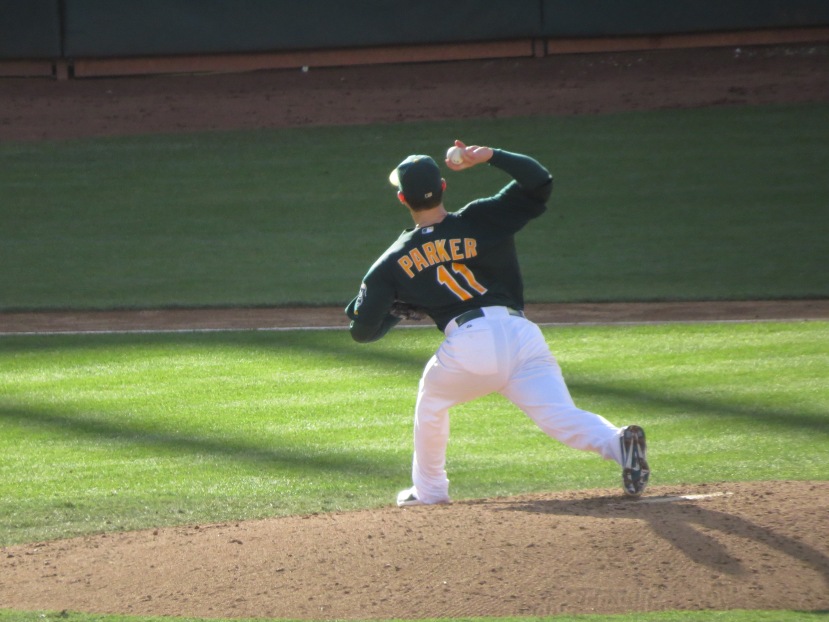 In the 6 innings that he pitched, Jarrod allowed 1 run on 4 hits.

I have never been to a game that started at 3pm that I can think of, which made for weird shadows and lighting!

The A’s tacked on a couple more runs int he 7th inning, on a Kurt Suzuki home run, then another run in the 8th on a Yoenis Cespedes HR, giving the A’s a commanding 9-1 lead.

The Twins went down 1-2-3 in the 9th, sealing the win for the Green and Gold!

This bumped their magic number down to just 1! 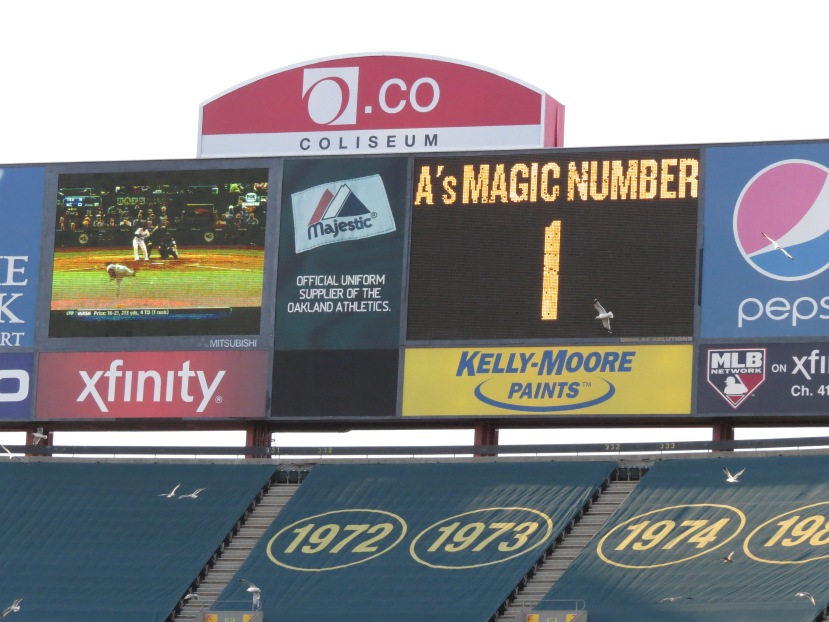 However, the part wasn’t over yet! The Rangers and Royals game had started at 4pm. As the A’s game came to a close, it was in the 7th inning. If the Rangers were to lose, the A’s would clinch the West! If the Rangers won, the A’s magic number would stay at 1, and on Sunday, either a Rangers loss or an Athletics win would secure the A’s the division!

When the A’s game ended, the Rangers were up 3-0. but the Coliseum people were nice enough to let the fans stick around and watch the Rangers and Royals play on DiamondVision! Most everyone in the RF Bleachers stuck around!

Every time the Royals recorded an out in the field, we did the same beat that is played on the drum after each A’s fielding out, showing the scoreboard how many outs there are. In the bottom of the 9th, Eric Hosmer homered to lead off the inning, leading us to break into a Royals version of “We Love you Oakland!”

There were also many “Let’s go Royals!” chants heard throughout the Coliseum. Not many people stuck around, but it was fun, despite the Rangers winning 3-1.

Sure I didn’t snag a ball, but it was sure one heck of a day!