The day following, I would be getting my wisdom teeth out, so my dad was willing to take me to this game as a last special thing before I got my teeth pulled. Also, Benjamin Hill, from MiLB.com was going to be at this game, and I was looking forward to meeting up with him as well.

My dad and I left our house at 3:30, getting to John Thurman at 4:30. As soon as we pulled into the parking lot, I ran out to the field to see a ball fly over the fence. Then someone picked up it up, and THREW IT BACK ONTO THE FIELD.

I asked my dad to take a peek over the fence, where this was the scene.

Nothing too fancy. At this point, I headed over to the Nuts bullpen, where I could see BP going on, then I decided to go back to where I had been previously standing.

I got 3 balls in Nuts BP. My first 2 balls were on back to back pitches. As soon as I got back from the bullpen, I saw a ball land, and I chased after it. As I was putting it in my bag, another ball was hit right at me.

Then, I was approached by the man who had thrown the ball back onto the field. He told me “Man, if I had known you were trying to get balls, I would have left the other 13 that were hit out here on the field. AHHH!!!!!

Then, on the last pitch of Nuts BP (I assume), a ball landed in the parking lot, and I grabbed that for Ball #3 on the day. Here are the 3 balls from Nuts BP. 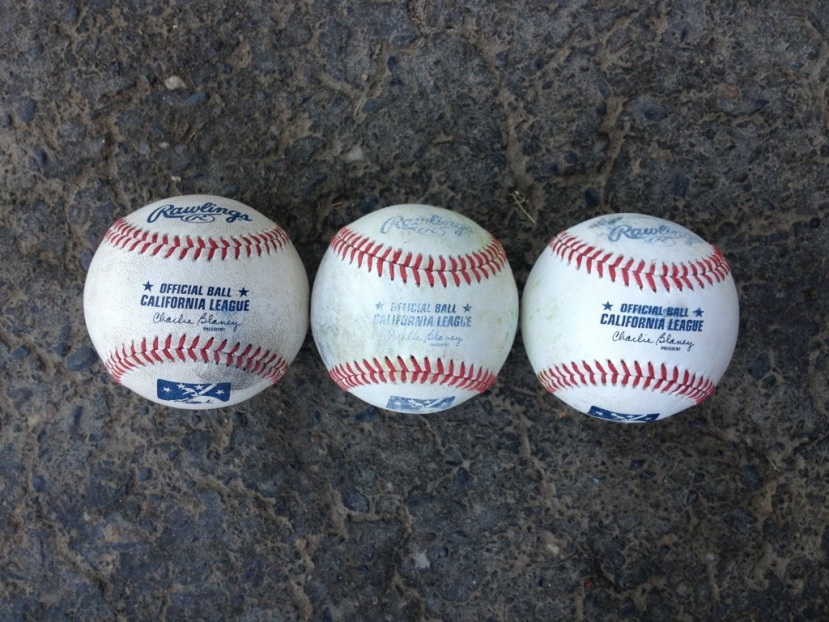 I decided to head back to the area by the Nuts bullpen, so that I could see what was going on in the bullpen, or on the field. 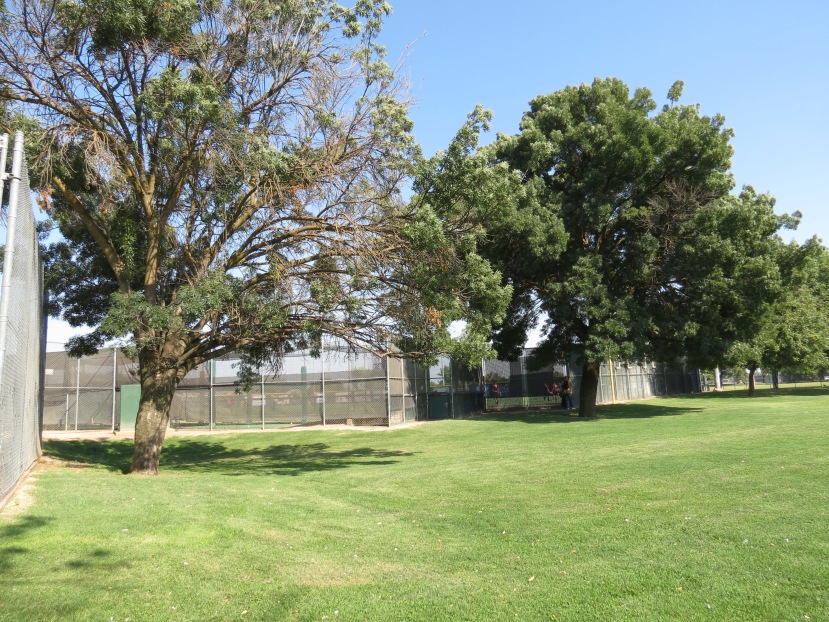 In the past 10 or so minutes, my dad had been just walking around the stadium taking pictures. He then texted me, telling me that he had found a ball laying on the ground outside the stadium, in foul territory, on the golf course! I knew this was where a lot of foul balls go during the game, but I had a hard time believing one had stayed there from Sunday’s game! Maybe just a REALLY bad BP swing?

Anyway, I headed over in that direction, when I noticed this open gate…

I decided to wander in, figuring it was probably just an entrance to the groundskeeper shed. Boy, I could not have been more wrong. I walked all the way down, then looked right. I was standing in the visitor’s bullpen! I looked left. I was looking into the visitor locker room! And there were players in there. Looking at me. So I got the heck out of there.

I then walked over to where my dad had told me to meet him, and sure enough, there was a ball. 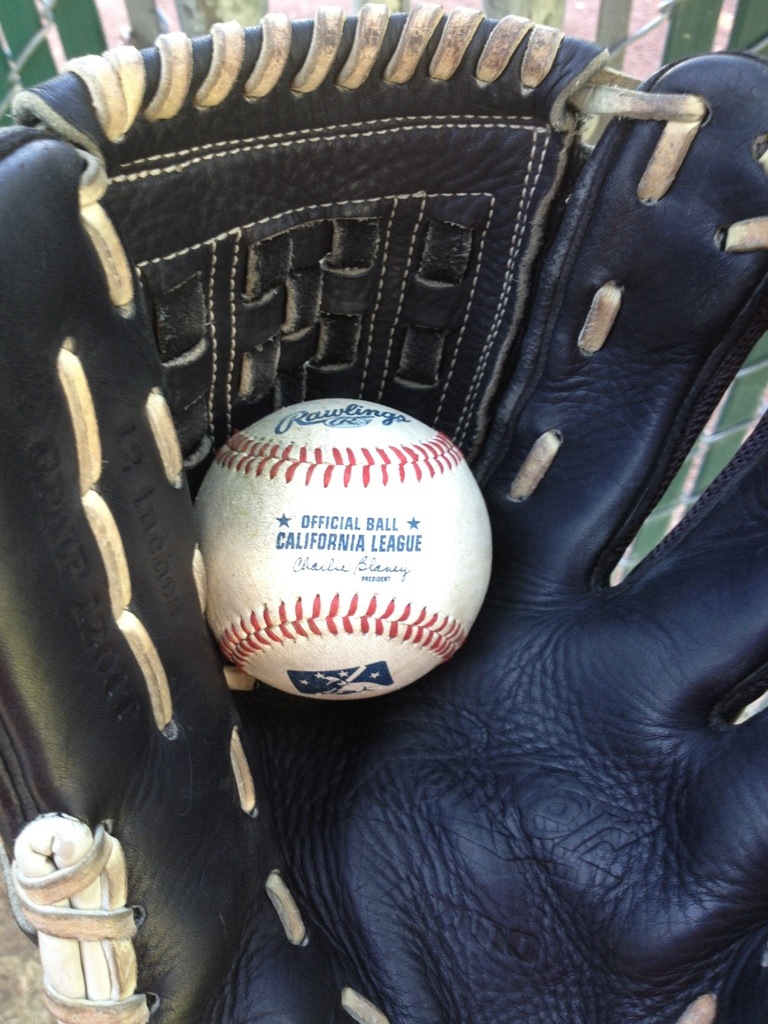 I was a little confused…

Then, it was time for JetHawks BP! The JetHawks have the 2nd most home runs in the Cal League, only to my Ports, so I figured BP would be good! 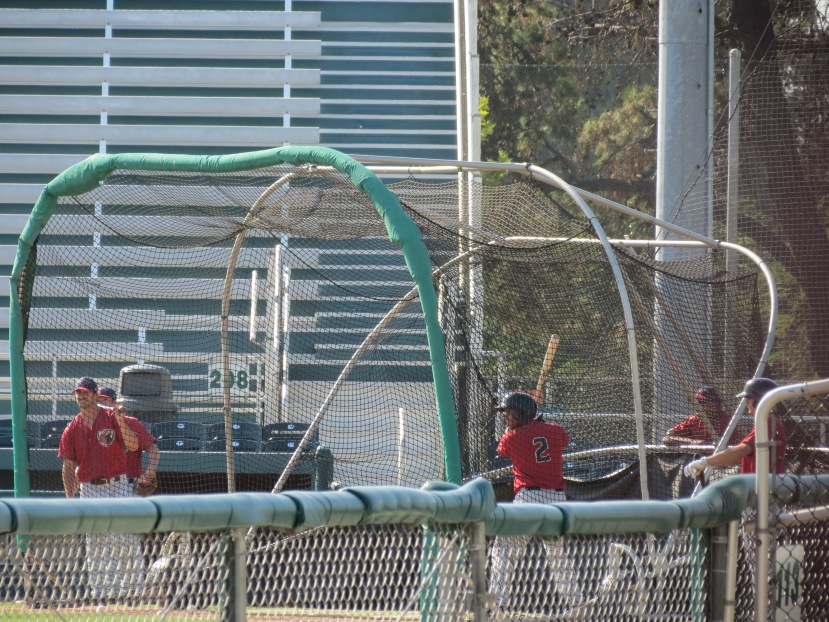 When I realized BP had gotten underway, I went over to the Nuts Bullpen area, where I could see the entire field, as well as the cage.

If something was hit over the fence, I could make the run to go grab it, as nobody was in Left Field or Center Field. Actually, it’s more Left-Center. Same thing with anything hit over the right field fence.

Soon, a ball was hit to Blair Walters, who then voluntarily tossed it to me, for my 5th ball on the day.

I decided to stay here, as I decided it maximized my snagging chances. 2 balls were hit over the right field fence that I ran and picked up. Here are balls 4-7 on the day:

and around 5:40, the players jogged in, so I went back over to the Left Field area to check for balls. There was only 1, but I picked it up.

Then, I got a call from my dad that he had found another ball, telling me that he spotted another ball. I headed over there, picking it up for my 9th on the day! And I hadn’t even gone inside yet.

My dad and I walked inside, flashing our media passes, as we headed for a walk around the stadium. Shortly after getting inside, we spotted a man who I believe is named John, who was with Benjamin Hill for this game.

For those of you who don’t know, Benjamin Hill writes the MLBlog called Ben’s Biz, where he talks about various Minor League promotions, Back in April, he announced that he would be going on 3 MiLB road trips in 2013. In the months of May, June, and August he would be covering 20  Minor League stadiums, watching 23 games. Who is John you might ask? I’m getting to that…. In 2012, Ben was diagnosed with celiac disease, which means he is on a gluten-freen diet, so in order to be able to experience all of the ballpark food, he decided to have a “designated eater” for each stadium. This person would sample as much food as possible from the stadium, reporting to Ben.

After we talked with John for a bit, we headed over to the area by the Nuts bullpen, where I saw a ball lying on the ground. Yes, I wished I had picked it up, but decided not to, as I didn’t want to get my Media Pass taken away.

My dad and I then wandered around, kind of just trying to explore the stadium to see what there is to see that we may not have already seen.

One in-game promotion the Nuts have is quite special. They pick a family that is at the game, that is sitting in the grandstand seats, to come down to this couch to watch the rest of the game in “comfort.”

From there, my dad and I decided it was time to find some shade, so we headed up to the last row, in front of the press box.

“John Thurman Field is the place for fun!

Where family entertainment is number one!

Baseball action is lots of fun, it’s the Modesto Nuts!”

That basically goes on repeat 10 or so times. 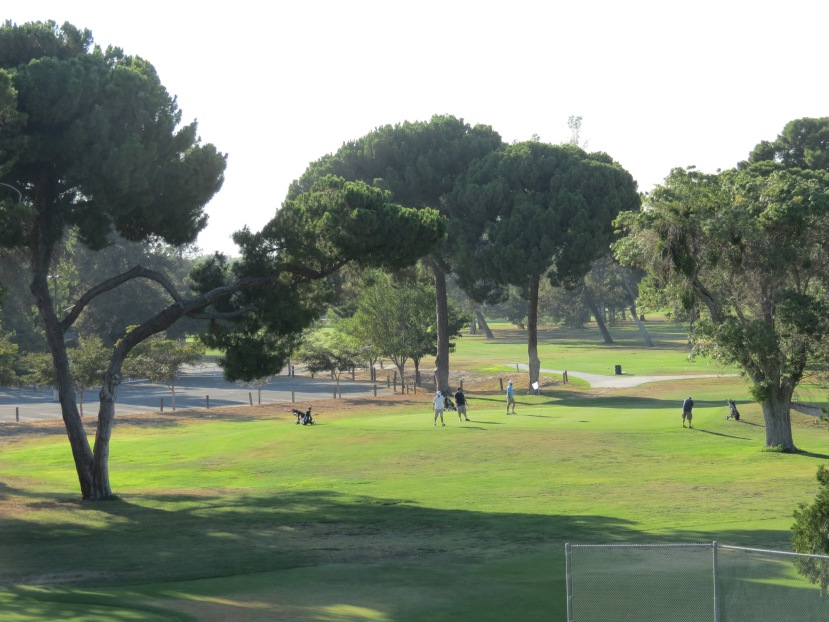 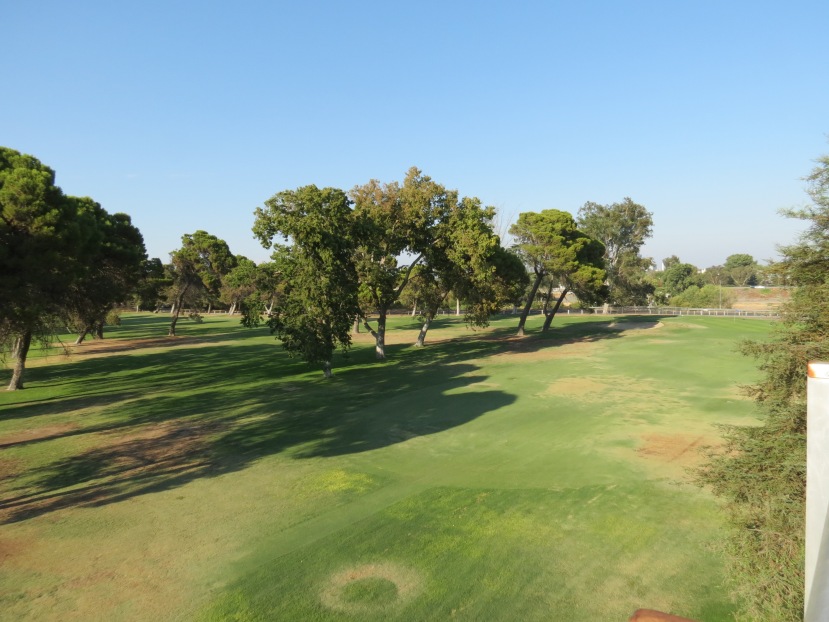 Eventually, the players made their way into the dugout.

And both teams started playing catch.

Meanwhile, Ben Alsup was warming up for the Nuts. 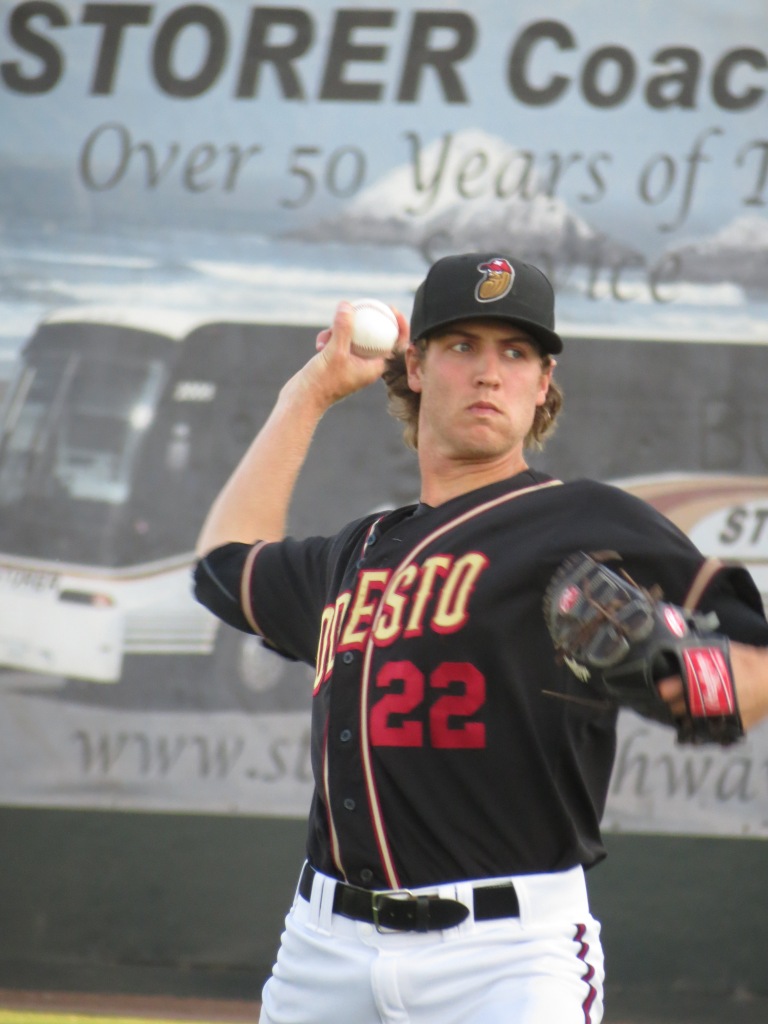 Then, it was announced that Benjamin Hill was entering from Center Field, so I took a look, and sure enough! He was driven to the home plate area in a 1959 Corvette. 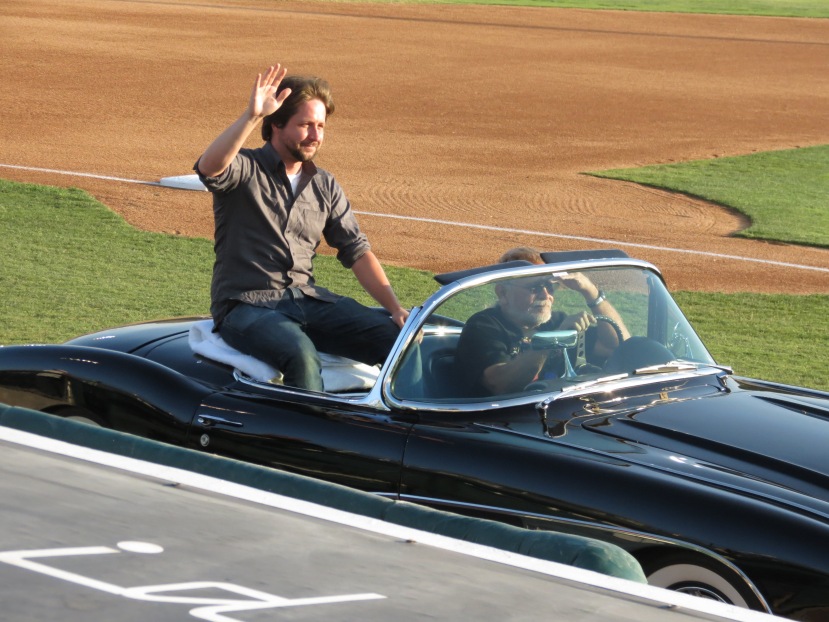 The car parked right in front of the dugout.

Here is a Vine he took from behind the outfield wall, waiting to be driven onto the field.

He then walked out to the mound, where he threw out the ceremonial first pitch. 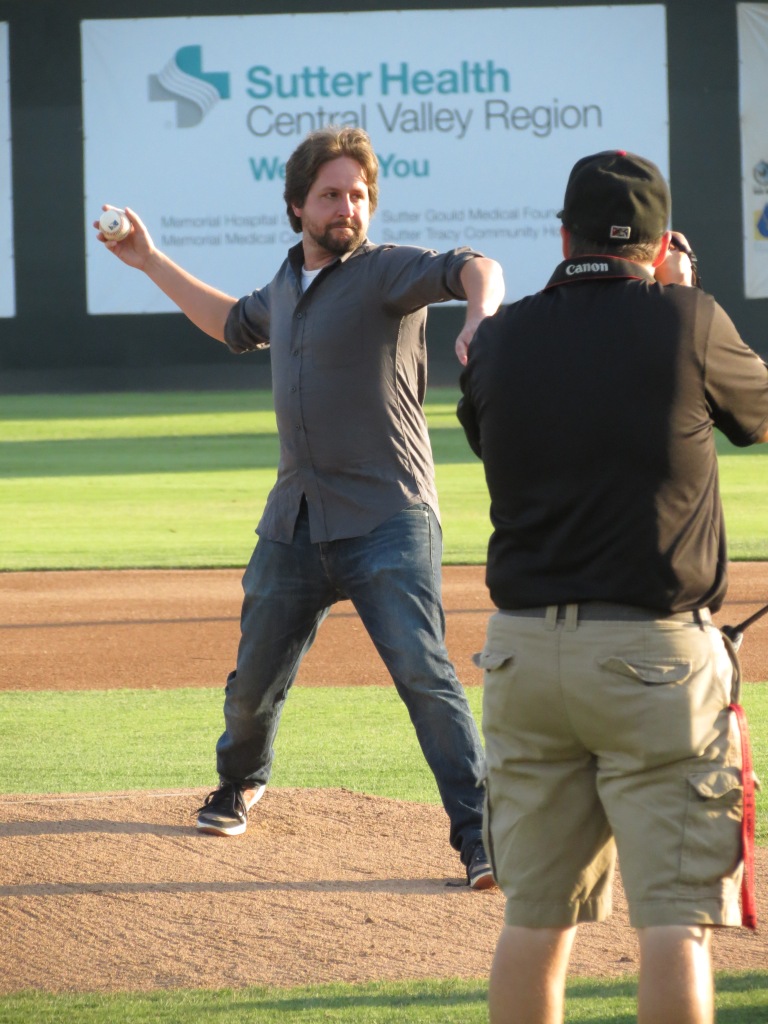 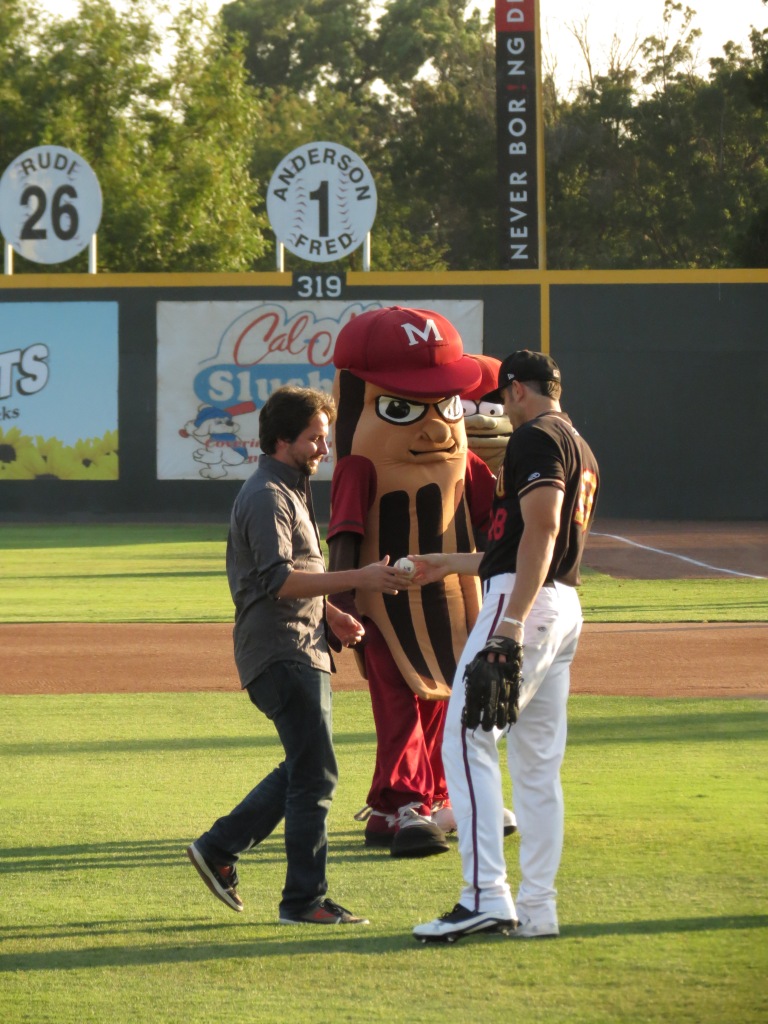 I got a Vine of his pitch, which was bounced, but that’s not a huge deal. Then, it was time for the National Anthem. 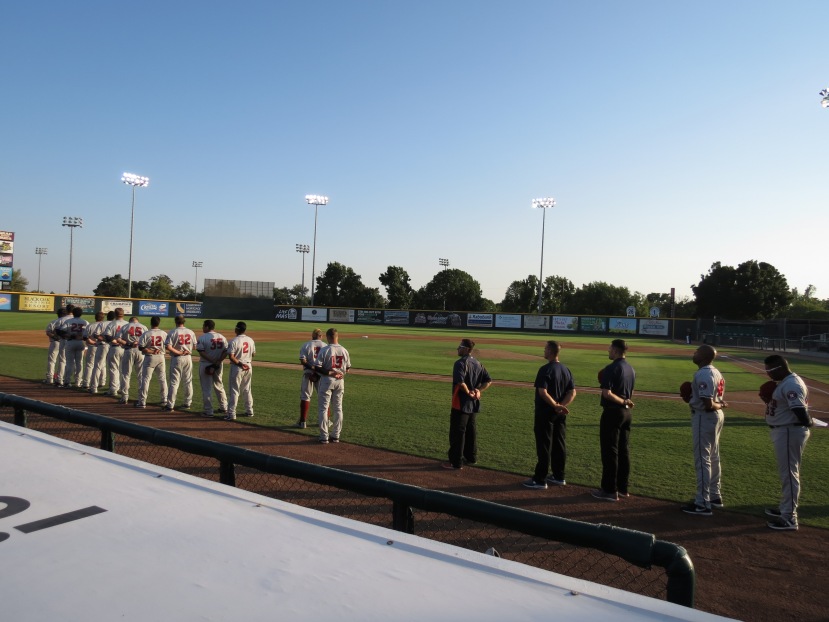 It was. Well… Interesting. Not the best performance, in my opinion. 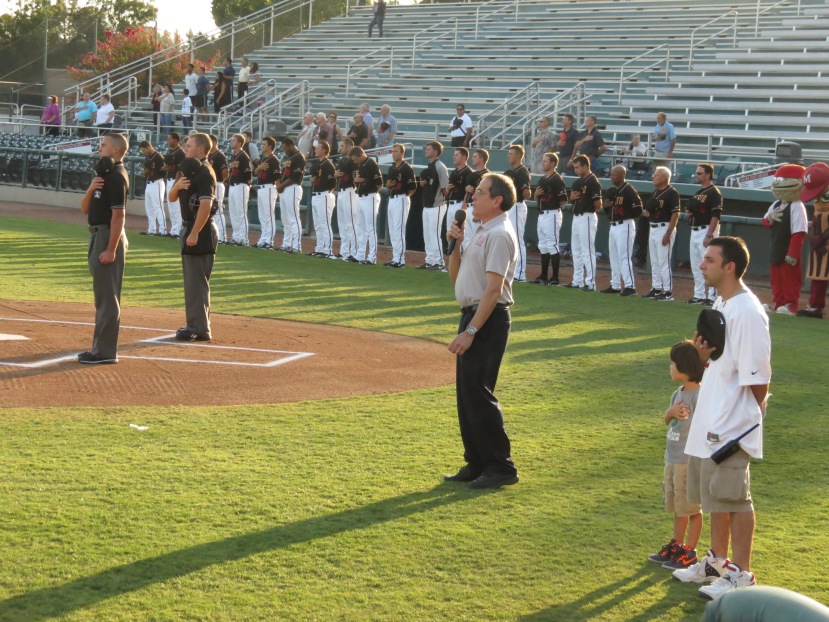 Then, the lineup cards were exchanged.

And it was time to go! Like I mentioned, Ben Alsup was on the mound for Modesto.

was pitching for Lancaster.

In the 1st, Modesto scored 2 runs, taking a 2-0 lead. David Kandilas walked to lead off the inning, then scored on a Ryan Casteel single.

Taylor Featherston soon singled, brining in Casteel to make the score 2-0. These would be the only runs that Modesto scored all game. This prompted a mound visit.

In the top of the 3rd, Andrew Aplin popped out to Trevor Story to end the inning, Trevor tossed me that ball, for my 10th on the day! Then, it was time for the T-Shirt launch! Ben was assisting with this!

You could tell everyone was having a lot of fun! 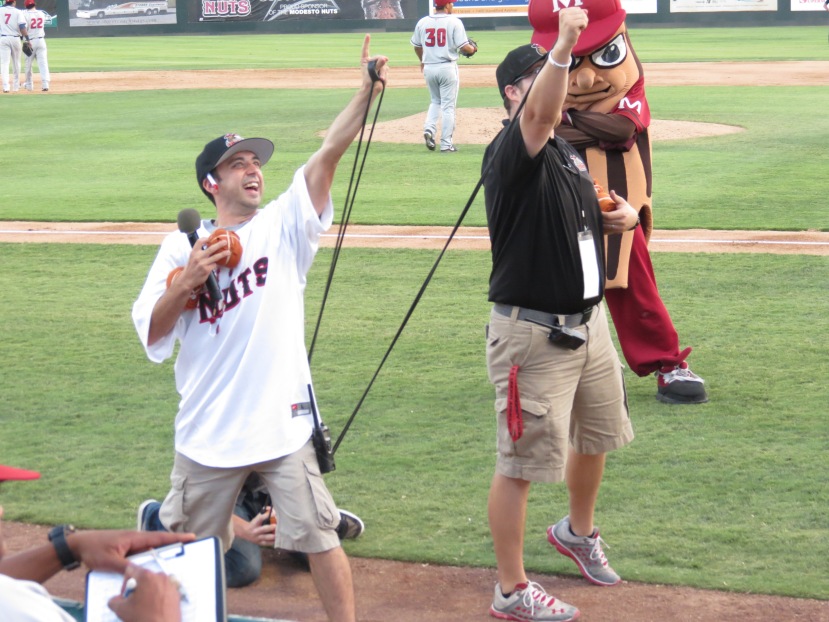 The last shirt they launched went high above the Nuts dugout.

Guess who ended up with a “lovely” orange shirt? 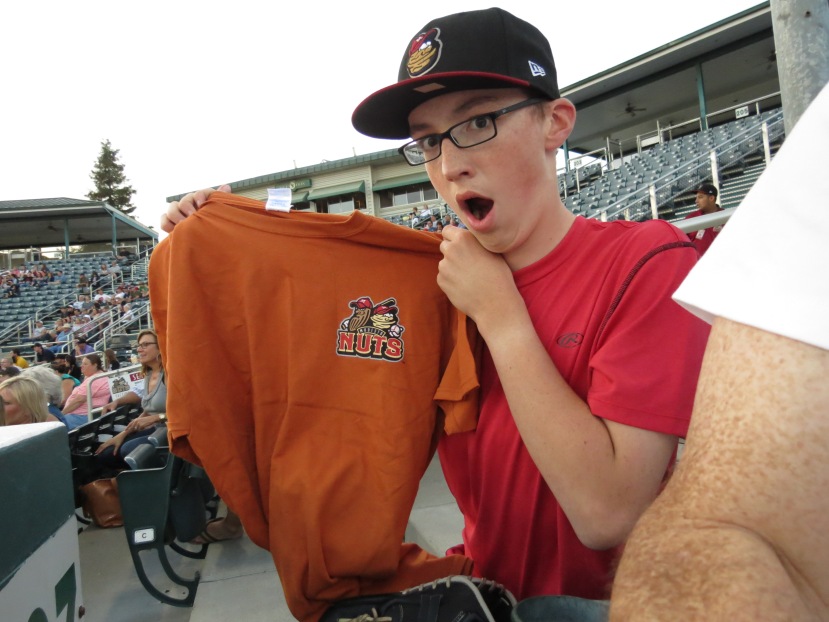 Yep, I did! After I showed my dad, I decided to go get a drink of water in the concourse. As I was walking, I saw something that looked like a baseball. I remembered that Andrew Aplin had fouled a ball out of the stadium in the 3rd. I was going to get it, but I had no clue where it had gone. So, I decided to go take a look.

This is where I was standing.

As I walked back inside the stadium, I caught up with Ben, who had been wandering around, checking out the stadium. I mentioned that I had 11 balls on the day, and also snagged one of the shirts that he had caught. He then asked if he could interview me for MiLB.com, so we headed up to the area near his suite, where we talked for about 10 minutes. I talked about Minor League ballhawking in general, as well as a few other ballhawking-related things. We then spent some time talking about his experience at John Thurman so far, including the food. Here is the Super Pretzel, which I didn’t even know existed.
I then mentioned the Bacon on a Stick (which I keep forgetting to try). Turns out, he has tried it!

Shortly thereafter, he did one of the mid-inning games, trying to guess the line from a movie.

Then, in the top of the 8th,  Tyler Heineman lined out to second baseman Taylor Featherston to end the inning, and Taylor tossed me the ball, for my 12 on the day!

I had set a new single-game record for myself! Then, in the bottom of the 8th, Taylor Featherson fouled a ball back out of the stadium, so I went to chase after it (getting a little muddy in the process), and I ended up with my 2nd foul ball of the game, my 13th ball of the day! 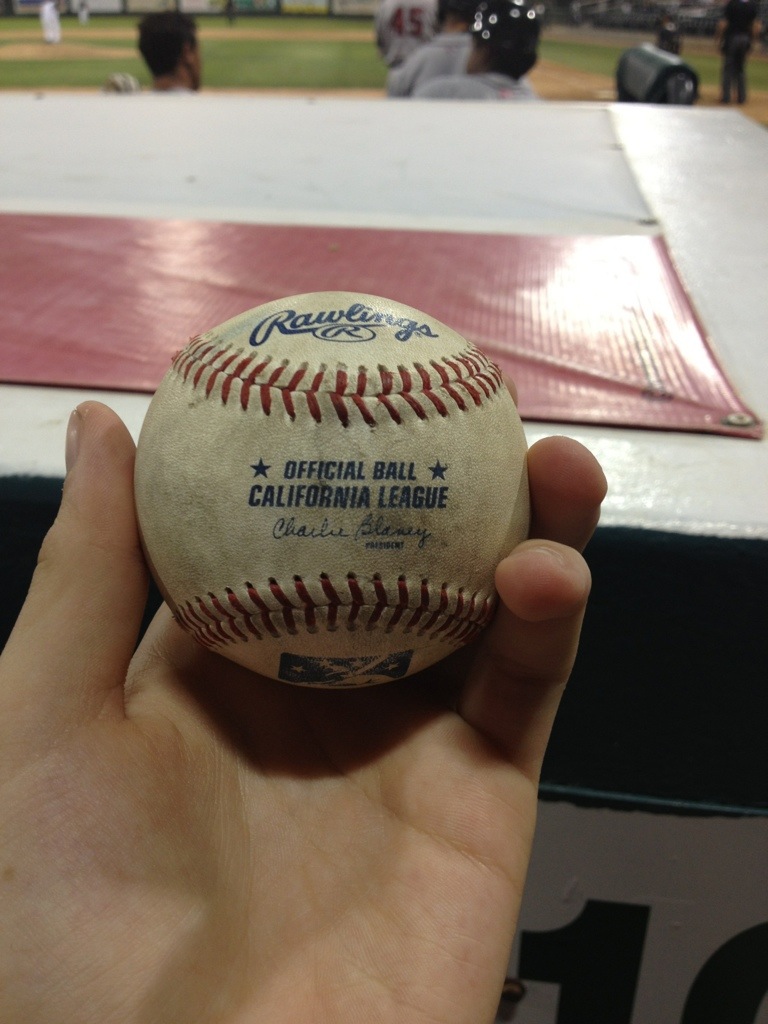 Then, the Nuts shut down the JetHawks in the 9th inning, securing the 2-1 victory.

I then walked down to the Lancaster dugout to try and get the lineup card.

And I did get it! I then headed over to try and get the Nuts lineup card as well, but it was not there. Ben got a Vine of the stadium as people were leaving, and at the start of it, you can see someone in a red shirt walking up from the Nuts dugout. It’s me!

Then, Mike on the Mic closed out a GREAT night!

Seriously, I had a GREAT time!

Thanks to my dad for taking me and Thank You to Benjamin Hill for taking some time to talk with me, and stopping at a great stadium in Modesto!

We then headed home. I was scheduled to get my Wisdom teeth out at 8am the next morning, so I knew I would be sidelined from games for at least a few days. But don’t worry, I had another game scheduled soon!
BALLHAWKING STATS: