Baseball? No… Basketball? Nope. Football? No. It’s time for some hockey! But wait, isn’t the NHL in a lockout? Yes, the NHL is in a lockout, but I decided to see some minor league hockey, in the ECHL! ECHL is basically Double-A Hockey.

My dad and I were going to see the Stockton Thunder, affiliate of the Edmonton Oilers.

I decided that I wanted to walk around the outside, before we got in line. Once we got to the front, we headed towards the ticket office, then to the parking garage. 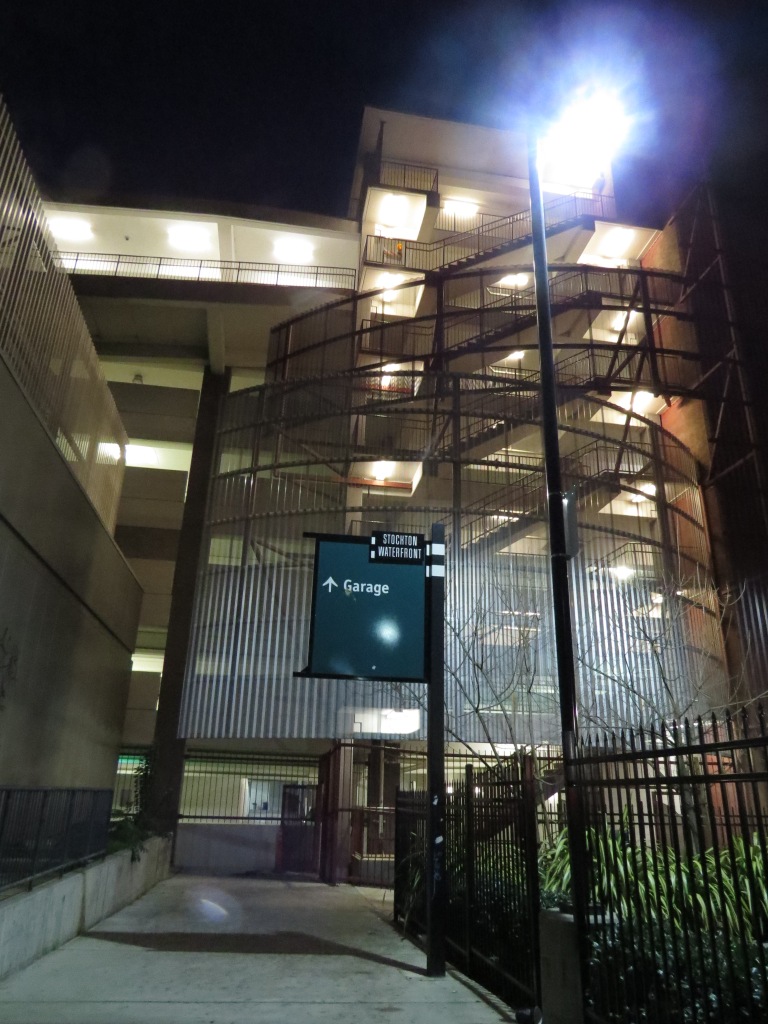 We walked around the garage, then out towards Banner Island Ballpark, home of the Stockton Ports. It was dark enough that I couldn’t really see anything, but I MISS BASEBALL SO BAD!!! It was hard for me, as I am very, very anxious to get back to ballhawking.

You may remember from this entry that the Stockton Marina is located right behind Banner Island Ballpark. My dad and I then headed out there to take a few pictures.

I took out my phone and recored a quick video.

My dad got some beautiful pictures of the Marina, including this one.

We finished walking around, then headed to get back in line. I would say there were 20 or so people in front of us.

I looked inside, and on the concourse, I saw this:

The players were volleying a soccer ball back and forth to warm up for the game! How cool is that?

The doors opened at 6:30, at which point I found out it was Mini-Thor bobblehead night. BTW, Thor is the mascot for the Thunder.

I was all excited to be getting a bobblehead when I found out it was for kids 12 and under. I’m older than 12. When I got my ticket scanned, the lady asked if I was twelve, and when I said yes, she said no. This means I didn’t get a bobblehead. Sad Nick.

My dad and I decided to walk around the concourse and see some of the different food options.

I headed into their team store, the Stockton Fan Attic, to get a hat, while my dad walked around some more to get some more pictures.

50 minutes before the game was scheduled to start at 7:30, the rink was pretty empty.

After purchasing a hat, my dad and I found some food, then headed to our seats.

I think the weirdest thing for me in all of this was the fact that I wasn’t trying to get a ball. It was uncomfortable for me, but I liked it!

I had gotten many recommendations to try to snag a puck, but with the netting all the way around the rink, I had to clue as to how I would be able to get much of anything.

When my dad and I got to our seats, the players were focusing on warming up, in a very intense mood. Unlike baseball players, they were taking warm-ups seriously. WOAH!!!

There were about 30 pucks being used, and I had no clue as to how I could get one.

Once the players had cleared the ice, a few people came on to gather up all of the pucks. There was a cute little boy sitting on the glass who was really excited to be there. One of the guys tried to toss a puck to him and missed the first 5 times. On his 6th try, he got the puck right against the net, and it slipped through, hitting the little 2 year old on the head!

He started crying and the man who had tossed the puck flinched.

He was holding that puck for the entire night 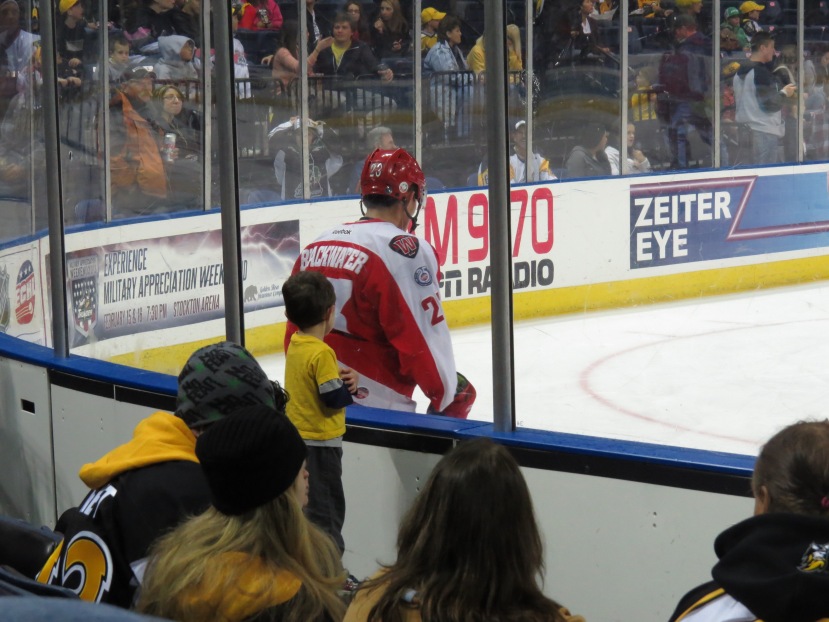 A few minutes later, the pre-game introductions of the players started. It was very impressive. The lights dimmed, then the 3 referees skated onto the ice.

After that, the Las Vegas Wranglers skated on, followed by an introduction of the Thunder starters.

I did a pretty good job following along with the game, however, I didn’t understand everything that was going on the entire time.

Within the first 5 minutes, the Thunder had scored a goal! 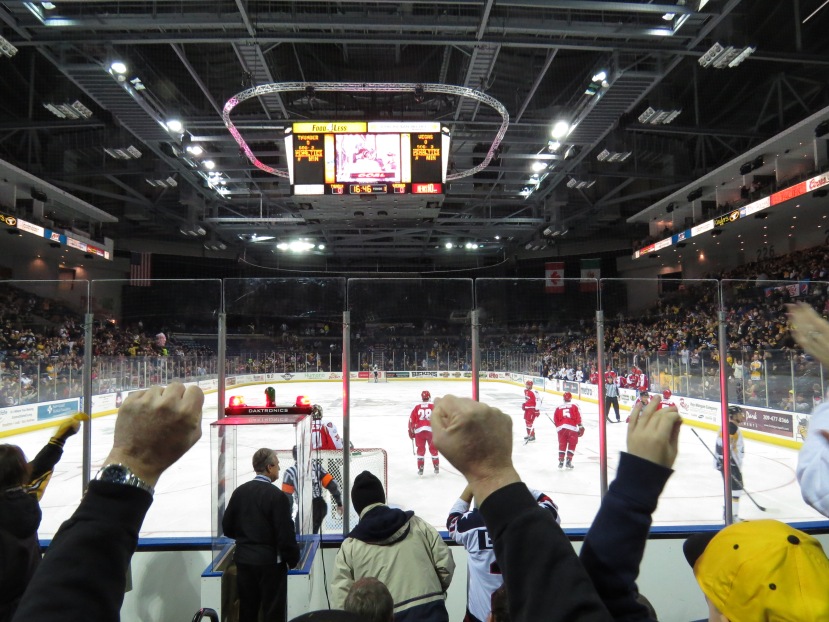 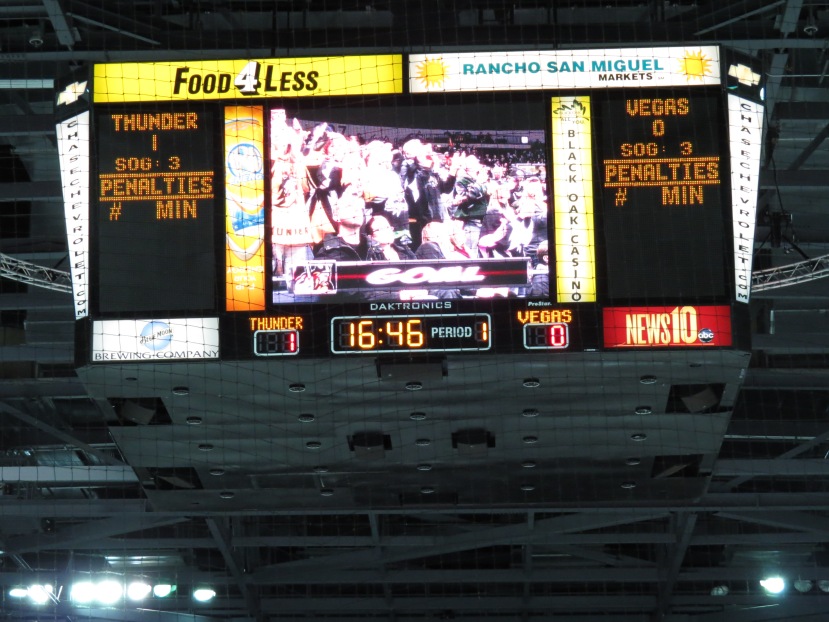 My dad got some pretty awesome pictures for this being his first hockey game! 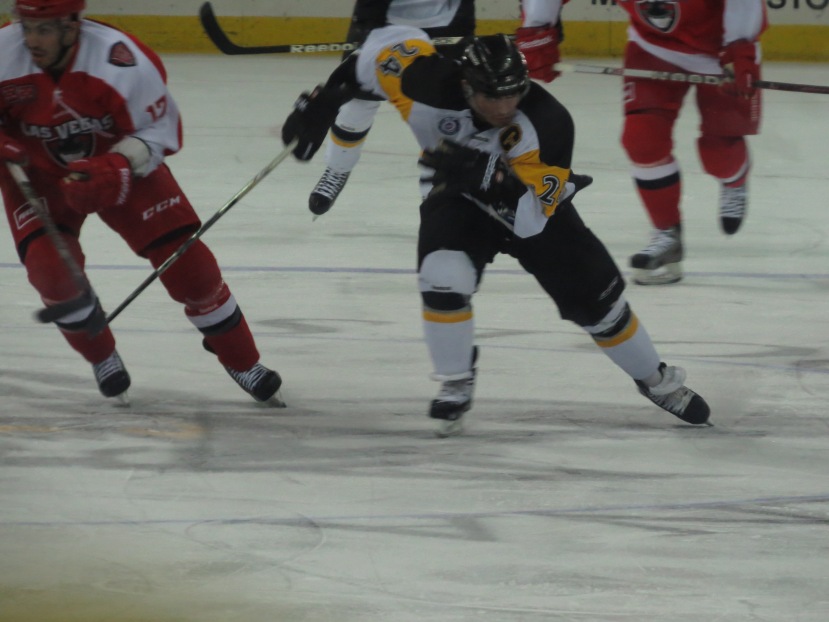 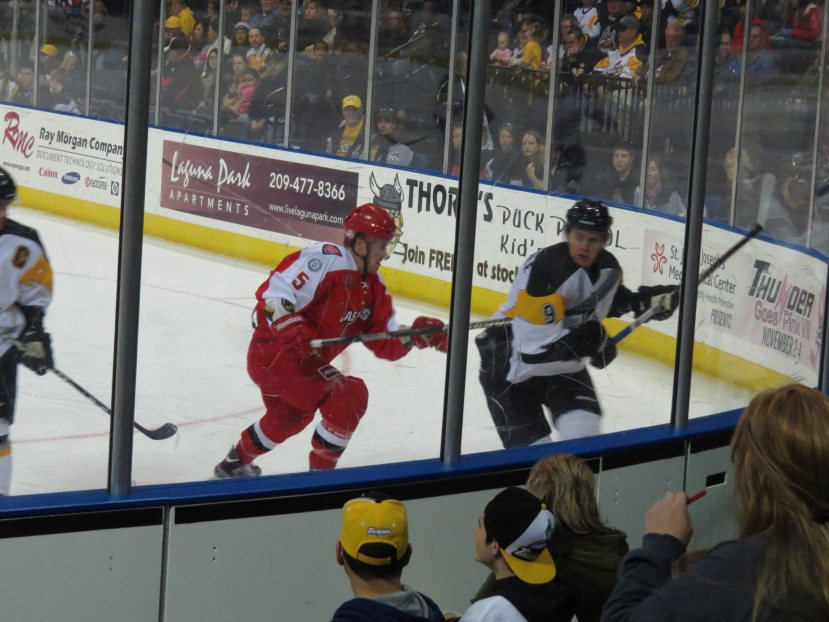 Since I don’t know much about hockey, I was surprised how violently players were slammed against the walls!

It was cool watching the substitutions happen so quickly.

During the final seconds of the second period, a bunch of the players began fighting, and it took a few minutes for the referees to break it all up. Everyone loved it! 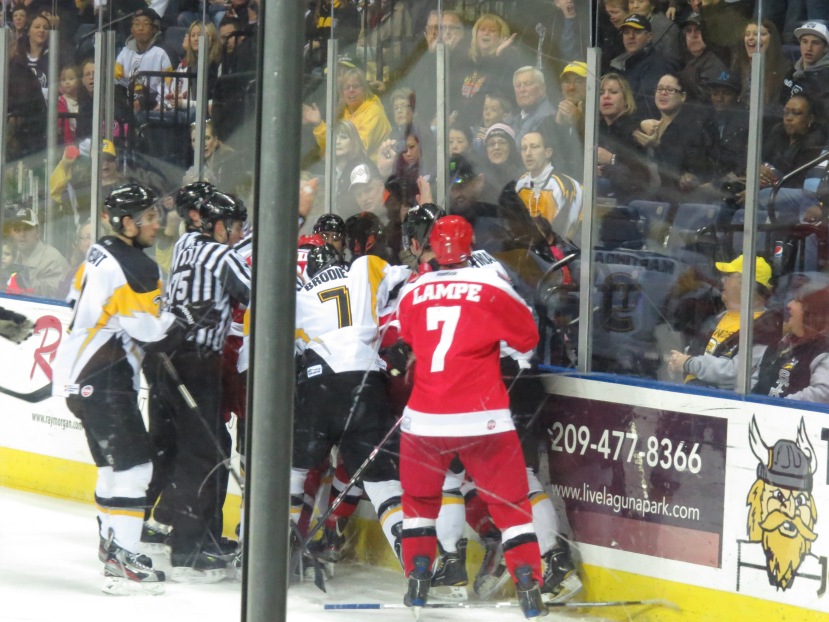 During the break after the 2nd period, the Thunder held “Chuck a Puck,” where people could purchase pucks, them throw them onto the ice, trying to earn money. It was very, VERY entertaining! 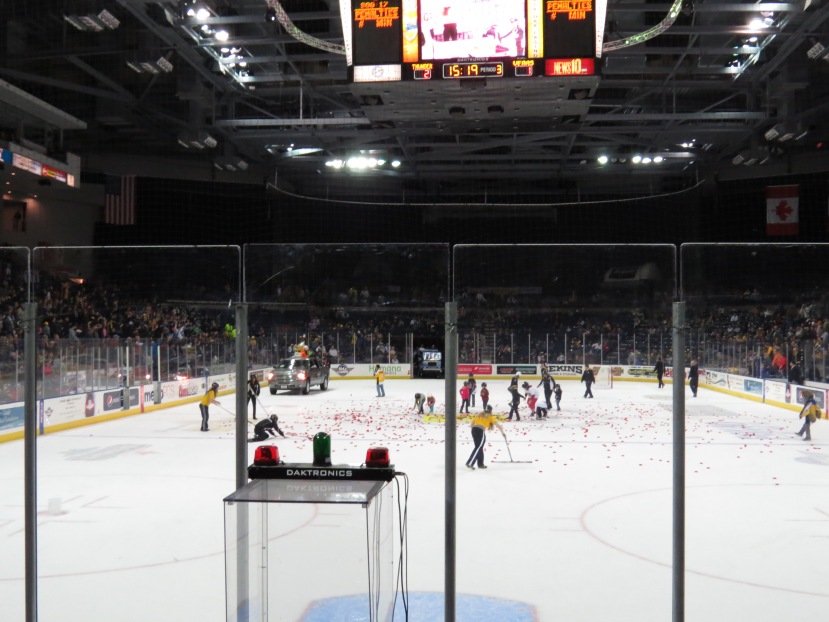 As they were cleaning the pucks up, they did a T-Shirt toss. I came pretty close to a couple.

Going into the final period, the game was very close; the Thunder were winning 2-1. The entire period was very intense! My dad got some amazing shots, showing just how intense it was getting. 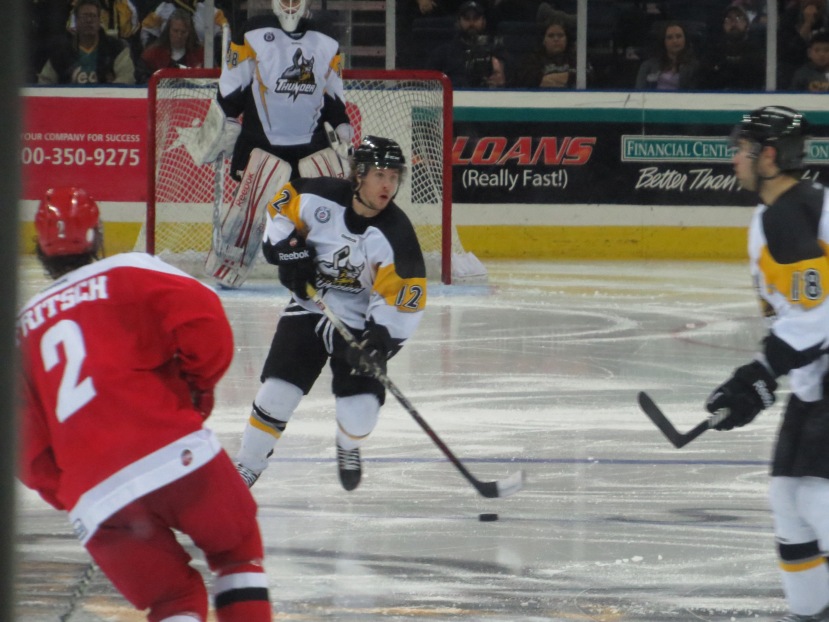 In the final minutes, the Wranglers tied it up, 2-2, sending the game into overtime. It was then that the attendance was announced at 6,431, which is about 2/3 full for the Arena.

With about 1 minute left in overtime, the Wranglers stuck in a game-winning goal, with the final score 3-2.

My dad and I immediately left our seats. I made a quick stop to the team store to buy a t-shirt, and we were on our way home.

Before we left, I thought about trying to get a puck or a stick that had broken earlier in the game, but I decided not to.

Wow! The whole experience was a lot of fun!

You can count on me going to more hockey games in the future, and ideally a few basketball games too. As of right now, A’s FanFest is only 28 days away!

I haven’t gotten anything in the mail lately, so I have a few entries for the forthcoming days, but for now, that’s it. Thanks for reading!